Give Me a Crash Course In . . . Ticket reselling

U2’s Croke Park show sold out in minutes this week. Then tickets showed up online at vastly inflated prices. Is this touting, and how can you get around it? 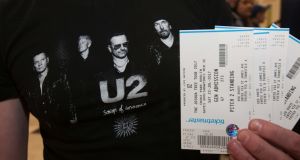 Why did 78,000 tickets for U2’s Joshua Tree concert at Croke Park on July 22nd sell out so quickly? There was huge demand from fans, both in Ireland and abroad, who want to see their favourite band play a hometown show. U2 could fill Croke Park many times over, so there was a scramble to secure tickets for what will be their only Irish show this year. They were all snapped up within six minutes.

So why were they then available on some websites at greatly inflated prices? Officially the tickets ranged in price between €39 and €186, with most costing €76. Some of the people who secured tickets on Monday morning bought them as investments, knowing they could resell them for up to 15 times their face value, reaping a big profit.

Is that legal? Ticket touting, which is to say reselling tickets for more than their face value, is illegal in some countries but still legal in the Republic of Ireland. Until legislation is introduced it will continue to be governed by the law of supply and demand. The band may not like it, fans may not like it, but it happens whenever there’s a big musical or sporting event that many people want to go to.

What are ticket bots, and why are they being blamed for U2 tickets being advertised for more than €1,000 on resale sites? Ticket bots are computer programs that automatically buy tickets the moment they appear for sale online, using multiple email addresses and credit-card numbers.

If I’m on my laptop, continually refreshing the Ticketmaster site, what chance have I against the ticket bots? Many people were able to buy their tickets at face value, but their odds of doing so would have been reduced by having to compete against the software.

Why aren’t ticket bots made illegal? Politicians are calling for a change in the law, to ban the resale of tickets for more than their face value. Legislation has already been drafted, and there is cross-party support for the proposed Bill.

Will it work? No. The Ticketmaster-owned resale site Seatwave (which has very expensive U2 tickets for sale for July’s show) is designed for people who, for whatever reason, can’t make the show and want to sell their tickets. It’s perfectly legal, and the market dictates how much people pay for the resold tickets. And even if sites such as Seatwave were banned, people would just go elsewhere.

Wasn’t “paperless ticketing” supposed to stop ticket touting? As paperless ticketing means producing the card you bought your tickets with in order to get into the venue, it has cut down on opportunities for touting. But you’re normally allowed to buy up to six tickets for any big musical or sporting event on a site such as Ticketmaster. You’re free to sell on five of them, say, for way above their face value, then simply walk your new friends into the venue on the night. The only solution would be to limit each buyer to one ticket, but nobody would agree to that. So you can make the touts’ job harder but are unlikely ever to be able to stop them completely.

Given what I’m up against, what’s my best chance of paying face value? Join a band’s official fan club, as these often give their members priority for tickets.

Anything else to avoid paying a tout? Make sure your credit-card billing and delivery address are accurate. Use the ticket seller’s mobile app if possible; it increases your chances for reasons too long to go into here. Otherwise, have only one Ticketmaster tab open on your web browser – the site can detect if you have multiple sessions from your connection and may drop you from the queue. And be persistent: not all 78,000 U2 tickets were released at 9am last Monday; they were released in blocks, over the morning, so the system didn’t crash.

If I really, really, really want to see a show, should I pay what a tout is asking? No. You’re supporting unfairness and greed. Browse the fan forums, where people who won’t be able to make the show might sell you their tickets at face value. Genuine people do exist. It’s just a case of finding them.