Madonna, Scarlett Johansson and other celebrities to attend 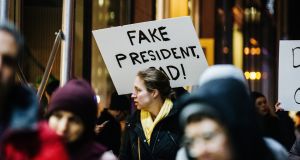 A large demonstration will take place in Washington on Saturday when some 200,000 people are expected to join the Washington Women’s March.

The organisers say the rhetoric of the election campaign had “insulted, demonised, and threatened” certain groups including immigrants, Muslims gay people and people with disabilities.

“In the spirit of democracy and honouring the champions of human rights, dignity, and justice who have come before us, we join in diversity to show our presence in numbers too great to ignore”, the group said on its website.

“The Women’s March on Washington will send a bold message to our new government on their first day in office, and to the world that women’s rights are human rights. We stand together, recognising that defending the most marginalised among us is defending all of us.”

The organisers estimate that sister marches, including four in Ireland, will see millions take to the streets on Saturday.

Celebrities including Scarlett Johansson, Amy Schumer and Patricia Arquette have pledged they will attend the Washington protest.

Ugly Betty star America Ferrera, who is helping organise the Washington protest, said: “Since the election, so many fear that their voices will go unheard.

“As artists, women, and most importantly dedicated Americans, it is critical that we stand together in solidarity for the protection, dignity and rights of our communities.”

Many of the women will be wearing pink knitted hats with cat ears - a reference to comments made by Mr Trump in a 2005 leaked video in which he bragged about grabbing women’s genitals.

Madonna has joined the list of celebrities speaking out against Trump. Speaking at New York’s Brooklyn Museum on Thursday night, she said: “He’s actually doing us a great service, because we have gone as low as we can go.

“We can only go up from here, so what are we going to do? We have two choices, destruction and creation. I chose creation.”

Madonna spoke alongside artist Marilyn Minter about art in a time of protest. Both vowed to lead protests against Trump, including attending Saturday’s Women’s March in Washington.

Madonna said that while she was “horrified” Trump won the election over Hillary Clinton, she now believes it was necessary.

“I do believe that Trump was elected for a reason, to show us how lazy and un-unified and lackadaisical and taking for granted we’ve become of our freedom and the rights that we have as Americans,” Madonna said. “I feel like people forgot what was written in the Constitution.”

She added: “They always say it’s darkest before the dawn and I feel this had to happen to bring people together, so let’s get this party started.”