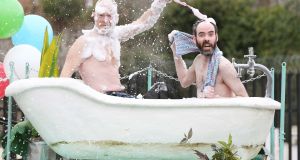 Charlie Jacob and Nicholas Kavanagh, from the Waterford Spraoi Street and Spectacle Company making final preparations on their floats prior to the St Patrick’s Day parade In Dublin. Photograph: Robbie Reynolds

Guest of honour will be Druid Theatre co-founder Marie Mullen. A crowd of 25,000 is expected at the parade, which will include everything from bicycles to “monster trucks”. It begins at 11.30am on Fr Griffin Road.

The parade will start at 1pm from the South Mall.

Kerry’s parades get off to an early start, with the first due before daybreak when the Dingle Fife and Drum will lead St Patrick through the sleeping streets at 6am, bypassing the new snake pit at the Dingle Aquarium.

The Sligo parade begins at noon at Mail Coach Road, with about 70 floats.

In Kiltyclogher, Co Leitrim, home of 1916 leader Seán Mac Diarmada, the parade organisers are holding a centenary-themed event, with participants in period costume.

The parade, which starts at 3pm, which be officially launched by Army Cmdt Donal McCafferty, who will read the Proclamation.