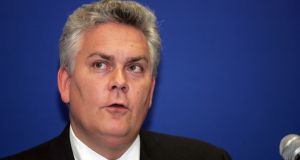 Former Independent News and Media (INM) chief executive Gavin O’Reilly has spoken of his “shock and absolute revulsion” over an alleged data breach at the company.

Mr O’Reilly said he believes he may have been a victim of the alleged breach along with the so-called “INM 19” who have already been identified by the Office of the Director of Corporate Enforcement (ODCE).

In an article in the Sunday Business Post, he said the revelation that potentially millions of documents, emails and files may have been taken out of the company and searched as “stomach-churning”.

Mr O’Reilly is the son of Sir Anthony O’Reilly, who was once INM’s majority shareholder. He became group chief executive in 2009 but stepped down in 2012 after a series of clashes with Denis O’Brien, who by then was INM’s largest shareholder.

He now works for Red Flag Consulting, a public relations firm which is embroiled in a long-running court battle with Mr O’Brien.

The year-long ODCE investigation arises out of a protected disclosure by former INM chief executive Robert Pitt. The ODCE will ask the High Court on April 16th to appoint inspectors to investigate corporate governance issues at the company.

To date details of the alleged data breach have come from a leaked affidavit filed in court by the ODCE, which alleges that server back-up tapes were removed from the offices of INM in 2014 containing data dating back to 1999.

‘Drop in the ocean’

Mr O’Reilly said that if the ODCE is correct in the affidavits it has filed, it is “highly likely” too that his data was breached.

“One of the so-called INM 19 was my executive personal assistant (Mandy Scott) for many years and had full access to all my emails and files,” he wrote.

“But its impact on me is just a drop in the ocean. So far, this curious drip-feed disclosure of what appears to have been the full data on INM’s server back-up tapes going all the way back to the 1990s has already affected all those who have ever worked for, or with INM.

“In that I’m stunned that INM has not yet contacted all of the affected people and sought to be more transparent.”

Mr O’Reilly said the most worrying thing about about the revelations from the ODCE was that INM journalists themselves were being targeted.

“Journalists are, and always have been, the most important people in media organisations like INM,” he wrote.

“We obviously need to know more about ODCE director Ian Drennan’s affidavit, but I genuinely never thought I’d see the day when an Irish media organisation would effectively be accused of treating its own journalists and its staff from the inside in this manner.”