Garda warning after €2,500 stolen from unlocked car in Cork 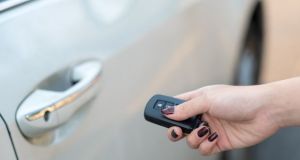 Gardaí said the gang - believed to be in their early 20s and city based - are highly mobile and have previously targeted unlocked cars in Co Cork. Photograph: Getty Images

Gardaí have urged car owners to be more security conscious after some 50 thefts, including one of €2,500, from unlocked cars in Cork city and county over the weekend by a gang suspected of targeting unsuspecting car owners.

Supt Brendan Fogarty of Bandon Garda station said 11 cars were broken into in Belgooly and Riverstick in south Cork late on Sunday and early Monday. This followed another 26 cars being broken into in Clonakilty 24 hours earlier.

“I would urge car owners that wherever they park their vehicles they make sure that they always take their property with them and that their vehicle is locked, alarmed and parked in a secure location because all too often these thefts are happening where cars are left unlocked,” Supt Fogarty said.

Supt Charlie Barry of Togher Garda station in Cork city said nine cars were broken into in the Togher and Passage West areas on Saturday night into Sunday morning.In one case €2,500 was taken from an unlocked car, he added.

Supt Barry said gardaí had received another report of an another unlocked car being broken into over the weekend and €500 in cash being stolen. The thieves missed another €500, which the car owner had left in the vehicle, he said.

“What’s happening is that these guys are going through estates, checking cars to see if they are locked and all too often they are finding they are not so they are stealing anything they find left in the car - cash, cameras, laptops and when the car is left unlocked, it makes for easy pickings,” he said.

In addition to the break-ins in West Cork, Togher and Passage West in the Cork City Garda Division, the gang also broke into 11 cars in the Ballincollig area in mid-Cork also on Saturday night and Sunday morning, again making off with a variety of items, mainly from unlocked cars.

Gardaí said the gang - believed to be in their early 20s and city based - are highly mobile and prolific, and have previously targeted unlocked cars in Douglas and Blackrock on the city’s southside, Ovens near Ballincollig as well as cars in Mallow and Bweeng in North Cork.

In one case over the weekend, the gang made off with a car and it was later found burned out on Cork’s northside but there have been other instances where the gang have also made off with cars when they’ve found that they were unlocked or the keys were easily accessed at the owner’s house.

Garda figures have shown since the Garda Park Smart appeal was launched in 2015, about €340,000 worth of property is stolen from parked vehicles each year with cash, laptops, tools, sunglasses, jewellery and sports equipment among the items stolen.