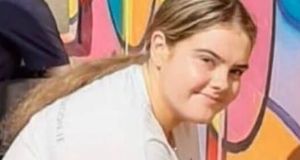 Gardaí investigating the death of a 16-year-old girl in a single vehicle car crash in Cork city on Wednesday night have appealed for a taxi driver who may have information to contact them.

Officers investigating the death of Kimberly O’Connor on Harbour View Road believe the driver of a white Toyota taxi who was in the area on Wednesday night may be able to help them.

Gardaí believe the driver of the taxi was travelling on Harbour View Road between 11.30pm and 12 midnight on the night in question and may have seen what exactly happened to cause the crash.

Anyone else who may have information regarding the collision, particularly any road users with camera footage, are also asked to contact Gurranabraher Garda Station on 021 494 6200.

Kimberly was killed when the car in which she was a front seat passenger collided with a wall on Harbour View Road in Knocknaheeny on the city’s northside at around 11.45pm on February 19th.

Gardaí are trying to establish the exact movements of the car, a 19-year-old Seat Toledo, in the run up to the collision which happened just yards from Kimberly’s home on Harbour View Road.

One theory they are investigating is that the car, driven by a 16-year-old boy, came down Court Town Drive and hit the roundabout at the junction with Harbour View Road where the driver lost control.

The car demolished pedestrian traffic lights on Harbour View Road before colliding with a wall where it came to a halt and Kimberly was pronounced dead in the vehicle by the emergency services.

The driver of the car left the scene but later presented at the Mercy University Hospital and is still being treated in hospital for head injuries. Gardaí are hoping to speak to him later in the week.

An 18-year-old man who was a back seat passenger in the car remains in a critical condition on a ventilator in an induced coma in the Intensive Care Unit of Cork University Hospital.

Meanwhile funeral arrangements have been published for Kimberly - a popular Transition Year student at nearby Terence Mac Swiney Community College just yards from the scene of the crash.

Kimberly, who lost her father Mark several years ago, is survived by her mother, Jennifer Haynes, sisters, Shannon and Britney and month old baby brother, Cody as well as Jennifer’s partner, Ken.

A rosary will take place for her at O’Connor Bros Funeral Home, North Gate Bridge on Sunday at 5pm and she will be removed to St Mary’s on the Hill Church in Knocknaheeny at 7pm on Monday.

Kimberly’s funeral mass will take place at St Mary’s on the Hill at 12pm on Wednesday with her funeral taking place immediately afterwards with burial at St Catherine’s Cemetery, Kilcully.