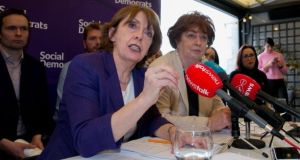 Social Democrats co-leaders Róisín Shortall and Catherine Murphy at the launch of the party’s manifesto in Dublin before the General Election. File photograph: Gareth Chaney/Collins.

Social Democrats co-leader Róisín Shortall has said her party will not participate in a coalition that involves both Fianna Fáil and Fine Gael.

Ms Shortall, a former minister of state for health, said the idea that a coalition involving both Fianna Fáil and Fine Gael was new was “laughable”, even if other smaller parties took part.

“That is not change as far as we are concerned,” she said.

Ms Shortall was asked on RTÉ if her party would continue to talk to Sinn Féin, after Garda Commissioner Drew Harris’s statement on Friday that he agreed with the PSNI’s assessment that the IRA’s so-called army council continues to oversee Mary Lou McDonald’s party.

“Yes we will and we will continue to speak to other parties,” she said.

The Social Democrats now have six TDs and have been involved in preliminary talks with various parties.

Talks on possible government formation will continue between the parties next week, but there is no sign of any breakthrough in the short term.

She said the numbers in the new Dáil dictated a government could not be formed unless two of the big three parties - or “medium-sized” parties as she called Fianna Fáil, Fine Gael and Sinn Féin - came together.

Referring to the Fianna Fáil manifesto, she described its contents as “same old Fianna Fáil”.

On Friday, Ms Shortall’s fellow co-leader Catherine Murphy, said she is unlikely to serve in a government that included Fine Gael and Fianna Fáil.

Referring to the prospect of an administration involving both those parties, Ms Murphy said: “It isn’t the kind of government we would want and I don’t think it is the type of government people told us they wanted.”