Gardaí shut down shebeens in Kerry and Monaghan 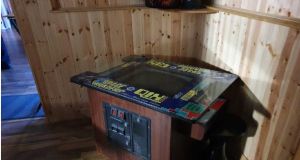 The shebeen in Co Kerry had a Space Invaders game and an 80 inch television.

Gardaí are anticipating an increase in the number of shebeens operating in the weeks ahead over Christmas and into the New Year as “wet pubs” will not open but said they will redouble their efforts to detect the illegal drinking dens.

Garda sources said the demand for places to meet and socialise will increase during the festive period but said Operation Navigation, which targets breaches of the licencing trade, would be intensified.

The warning comes after the discovery of two more shebeens, one in Co Kerry and the other in Co Monaghan over the weekend.

During a search of a property in Causeway, Co Kerry, on Saturday evening gardaí discovered a shebeen, which had been set up to serve draft beer and a range of other alcoholic drinks.

The premises had also been fitted with a pool table and other facilities for drinkers including a Space Invaders arcade game installed for patrons on the premises, which had undergone renovation to create a pub-style atmosphere.

“Shortly after 8pm (on Saturday) gardaí conducted a search under warrant of the suspected shebeen premises and located a fully operational bar,” Garda Headquarters, Phoenix Park, Dublin, said of the discovery of the illegal pub.

“The bar featured a number of beer taps, along with a fully operational cooler room with gas lines and cooler to operate the taps. The premises were fitted with a number of tables, chairs, pool table, dart board, arcade games and an 80 inch flat screen television.”

The shebeen was discovered as part of Operation Navigation and after a criminal investigation following the receipt of intelligence about the premises operating illegally. A file is now being prepared for the DPP with a view to pursuing criminal charges against the suspect running the shebeen.

In Co Monaghan, a private premises was searched by gardaí in Castleblaney investigating alleged breaches of liquor licencing legislation at approximately 9 pm.

During the search substantial quantities of alcohol were seized along with beer taps and other bar equipment. All of those present were identified by gardaí. No arrests were made but inquiries are ongoing and a file will now be prepared for the Director of Public Prosecutions, gardaí said.

The weekend operations follow the discovery of shebeens, some of them sophisticated operations involving considerable investment, in recent months in Co Kildare, as well as in counties Meath, Laois and Westmeath. Video footage has also emerged showing shebeens packed with patrons during the pandemic, some celebrating sporting occasions.

Under the Government’s reopening plan for December, restaurants and pubs “operating as restaurants with their own kitchen” will be allowed to reopen on December 4th. “Wet pubs” - namely those which do not serve a substantial meal with drinks - will remain closed.