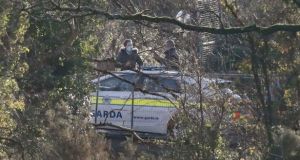 Gardaí investigating the discovery of a skull in east Cork have sent DNA samples for analysis to match against samples held in the Garda missing persons’ database in a bid to identify the remains.

Gardaí are now satisfied, following an initial postmortem examination by Assistant State Pathologist Dr Margaret Bolster, that the skull belonged to a woman who was not older than 65 when she died.

They believe from discussions with forensic anthropologist Dr Lorraine Buckley of the State Pathologist’s Office that the remains were at the scene where they were found near Midleton for between one to five years.

Gardaí have also confirmed they have been in touch with Richard Satchwell whose wife Tina (47) disappeared from their home in Youghal, Co Cork, in March 2017, but they stress this is simply in line with protocols regarding missing persons.

“A garda liaison officer was in contact with Mr Satchwell once we were satisfied that the remains were those of a woman given that Tina Satchwell is somebody from the area who was reported missing to us,” said a garda source.

“It is standard procedure to keep relatives informed of any developments as regards finding their loved ones but it really would be far too early to speculate at this stage as to the identity of the remains until we get tests results back.”

The skull was found on Tuesday January 5th by workmen clearing ground for a car park on the proposed Midleton to Youghal Greenway near the Shanty Bridge in Roxboro some 3km east of Midleton.

The remains were found when a JCB driver went to level a one-metre high mound of earth and rubbish adjacent to the proposed greenway route which follows the line of the old Midleton to Youghal railway which closed in 1987.

Gardaí were notified and an investigation team under Supt Adrian Gamble of Midleton Garda station requested the services of the State Pathologist’s Office and Dr Bolster visited the scene the next day before the skull was removed.

A Garda search team began an examination of the area and The Irish Times has learned that they have now recovered almost an entire skeleton which they believe belongs to the woman as well as some clothing and a crucifix.

However, gardaí say it will be later this week at the earliest before they expect to receive the results of tests matching DNA from the skull with those of missing persons.