Gardaí call for vigilance after 10 road deaths in ‘dreadful’ week 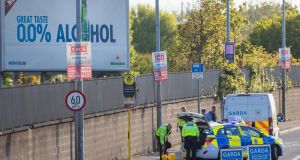 To date in 2019, 634 drivers have been arrested for driving under the influence of alcohol or drugs. Photograph: Tom Honan

Gardaí have warned against complacency on the roads after a week in which 10 people were killed in road collisions, including four young men in one crash in Co Donegal on Sunday.

Chief Supt Finbarr Murphy of the Garda National Roads Policing Bureau appealed to the public to be “extra vigilant” particularly given the dark evenings.

Chief Supt Murphy also told motorists that gardaí would continue to target the offences which contributed most significantly to road traffic collisions, in particular drink-driving and speeding.

To date in 2019, 634 drivers have been arrested for driving under the influence of alcohol or drugs.

Three were arrested for drug-driving offences at one checkpoint in Cavan in the past week.

Some 2.9 million motorists were monitored by the safety camera network so far this year and 9,343 have been detected speeding.

Chief Supt Murphy said: “There is no place on our roads for people who do not comply with legislation. These people are putting not only their own lives at risk but also the lives of all other road users.”

Improved policing measures were credited with helping to reduce the death toll on Irish roads in 2018 to 149 fatalities, the lowest total on record.

Meanwhile, the chairman of a road safety group in Donegal said more needed to be done to tackle the driving culture in the county.

Mick Quinlivan of Pro Social Ireland said people in the county were reticent about the instances of multiple fatalities in road crashes.

Mr Quinlivan stressed that he was not aware of the circumstances surrounding the road crash which claimed the lives of four young men in the county on Sunday evening.

He extended his sympathies to the families involved and said everybody was “shocked” by the scale of what happened.

Pro Social Ireland was set up in 2012 in the wake of the horrific car crash which ended in the deaths of eight people outside Buncrana in 2010.

“One of the reasons we formed in the first place was to change attitudes to driving,” he said.

Mr Quinlivan said his organisation had delivered programmes to several schools in north Donegal over the last three years.

The four-day programme is designed to tackle the culture of excessive risk among young drivers in the county.

“We want to bring about a change of attitude towards driving. We try to have a logical conversation with offenders and young people, but we all have to do more,” he said.

She added: “Our deepest sympathies are not only with the families of the bereaved who have lost their loved ones over the weekend but indeed with all the families of victims of road crashes so far this year.

“While it is understandable that people will want answers following such tragedy, it is important that we allow the gardaí conduct their investigations and not rush to judgment.”

She hoped the crash would remind people that life is fragile and added: “Nobody ever believes it will happen to them but tragedy can strike anywhere at any time on the road. We need to remember this every time we set out on a journey.

“I would appeal to road users to slow down, drive at the right speed for the conditions and watch out for vulnerable road users. Don’t drive when impaired through drink, drugs or fatigue and always wear a seatbelt and ensure passengers are wearing theirs too, no matter how short the trip.”