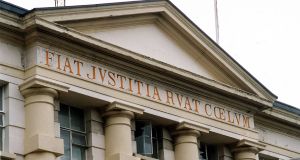 Bridewell Garda station in Cork: The Department of Employment Affairs and Social Protection officials became suspicious when a man was asked to produce proof his father was alive in order to qualify for the Centenarian’s Bounty. Photograph: Alan Betson

Gardaí in Cork arrested a 57-year-old man for questioning about a €500,000 old-age pension fraud after he continued collecting payments every week for both his deceased parents for about 30 years on Friday.

Department of Employment Affairs and Social Protection officials became suspicious when the man was asked to produce proof his father was alive in order to qualify for the Centenarian’s Bounty.

The Centenarian’s Bounty involves a 100-year-old receiving a payment of €2,540 and congratulatory letter signed by President Michael D Higgins on their birthday once the department is satisfied about the veracity of the claim.

Detectives arrested the man from Cork’s northside just after 9am on Friday when he went to collect the pension payments for both his dead father and mother at the general post office on Oliver Plunkett Street in Cork city centre.

The man was arrested and brought for questioning to the Bridewell Garda station, where he was detained under section 4 of the Criminal Justice Act which allows gardaí hold suspects for up to 24 hours.

Gardaí believe the man collected approximately €520,000 in total in the pension fraud which, stretching back some 33 years, is believed to be one of the longest of its kind uncovered in the history of the State.

The man’s arrest followed a joint investigation by An Garda Síochána and the department, which notified gardaí of suspicions about the man’s claims. The man was released without charge late on Friday night. A Garda spokeswoman said a file would be prepared for the Director of Public Prosecutions and the investigations were ongoing.

Gardaí and department officials carried out a follow-up search of the man’s family home on the northside of Cork on Friday and seized some €9,800 in cash, which they believe are the proceeds of his suspected fraud.

Det Insp Danny Coholan of Anglesea Street Garda station said: “Gardaí and the Department of Employment Affairs and Social Protection have a long standing relationship which aims to target those who attempt to defraud the State.”

Three years ago, a Dublin man was jailed for 18 months after he admitted stealing almost €160,000 in benefits.

Brian Bobey from Walkinstown Parade in Dublin began claiming his mother’s pension after her death in May 1997 and was only caught in October 2013 when the then Department of Social Welfare began an investigation.

Mr Bobey, then aged 64, offered to repay the money at a rate of €50 a week but Judge Patricia Ryan at Dublin Circuit Criminal Court jailed him for 18 months after hearing it would take him 63 years to repay the debt at such a rate.