Galway says goodbye to one of its finest hurlers

Tony Keady: ‘The greatest centre-back, on and off the pitch’, says daughter at funeral 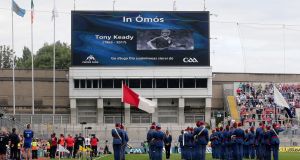 A tribute to the late Tony Keady before the All-Ireland Senior Hurling Championship Semi-Final at Croke Park, Dublin, on the day of his funeral. Photograph: ©INPHO/Lorraine O’Sullivan

Tony Keady’s white helmet was brought to the altar by former teammate Gerry McInerney at his funeral mass on Sunday as Galway hurling said goodbye to one of their finest players.

Mourners were told by Oranmore parish priest, Fr Diarmuid Hogan, that while hurling played a big part in Tony Keady’s life, his family were always the main priority.

Thousands flocked to the Church of The Immaculate Conception in Oranmore where they joined Tony’s wife, Margaret, daughter Shannon (15), and sons Anthony (13), and twins Jake and Harry (11) to pay their respects to the 53 year old who died last week after suddenly becoming unwell.

Among those present were former teammates from his native club Killimordaly and Galway, along with representatives from Ahascragh-Fohenagh and Oranmore-Maree GAA clubs, and Calasanctius College Oranmore, where Mr Keady was a caretaker.

There was a guard of honour from the Killimordaly, Ahascragh-Fohenagh and Galway players.

Fr Hogan, the chief celebrant, was joined by administrator of the Galway diocese Canon Michael McLoughlin and seven other priests who concelebrated the mass.

One of his other Galway teammates from that era, Pete Finnerty, brought the hurley that Mr Keady used when he won the man-of-the-match award against Tipperary in the 1988 decider, to the altar.

Mr Keady’s daughter, Shannon, paid a touching tribute to her father and said he was the greatest centre-back, on and off the pitch.

“Dad is my idol and the great centre-back of all time. He was a warrior and a legend on the pitch but a bigger legend off it,” she said.

“This exact time last week I was sitting on his knee in Croke Park eating Jelly Tots. Dad had them all separated so I would get the purple and red ones.”

Former Galway and Killimordaly teammate Eanna Ryan carried a Killimordaly jersey, while the last hurley that Mr Keady crafted was also brought up.

Fr Hogan said that while hurling was one of the major parts of Mr Keady’s life, his family always came first.

“Hurling, while it was his passion ... was not the most important thing in his life,” said Fr Hogan. “Tony’s home was here in Frenchfort. In pride of place are Tony’s awards – All Stars, Hurlers of the Year, medals, jerseys and hurleys. But the most significant place is above the mantlepiece” where there was a photograph of Margaret, Tony, Anthony, Jake, Harry, Shannon and the dog Bingo.