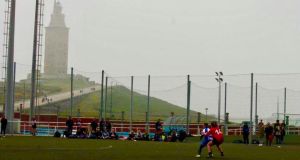 According to myth, the Milesians from Galicia sailed to Ireland after their leader Breogán built a tower based on the Roman tower of Hercules which still stands in A Coruña.

Spain’s most read newspaper, Marca, usually preoccupies itself with the comings and goings of the country’s largest football clubs especially Real and Atlético Madrid.

Last week the sports newspaper devoted a double-page spread to an endeavour which in terms of scale and ethos is at the opposite end of the sporting spectrum to the giants of La Liga – Gaelic football in Galicia.

The sport only started in Spain’s westernmost province in 2010. In the space of less than a decade, 14 clubs have started up and there are now 14 male and seven female football teams.

Though Gaelic sports have taken off in many parts of the world, the Galician experience is almost unique in that the growth is indigenous and being driven by people with no connection to Ireland. Just 10 of the 300 or so players are Irish-born and some clubs have no Irish connection at all.

Occasional informal matches were previously played by Irish ex-pats, such as those in celebration of St. Patrick’s Day organised in the 1990s by Louth-man Dr Alfred Markey at the University of Vigo.

The boom began with hibernophile Wenceslao Garcia Zapata, an academic based at the Universidade da Coruña. In 2010, he visited Croke Park to watch the Leinster semi-finals between Louth and Westmeath and Dublin and Meath. This was, incidentally, the last time Dublin lost a match in the Leinster Championship. By his own admission Mr Zapata has been “hopelessly in love with this sport” since then.

He founded the first club in his native A Coruña, Coruña Fillos de Breogán (Coruña’s sons of Breogán), harking back to the myth that the original Celtic people in Ireland came from Galicia.

According to the Leabhar Ghabhála na hÉireann (Book of Invasions), the Milesians from Galicia sailed to Ireland after Breogán built a tower based on the Roman tower of Hercules which still stands in A Coruña. From the high point, his son could see Ireland, the end point of their wanderings around the world.

The Celtic affinity between Ireland and Galicia is one of the reasons the game has taken off in the region, according to Ángel Negrete, the president of the Galician Gaelic football association (Asociación Galega Fútbol Gaélico).

Galician nationalists have frequently looked to Ireland for inspiration and the region’s most famous traditional musician, Carlos Núñez, has collaborated with The Chieftains in the past.

“Many people in Galicia like Irish culture. We think of it as a brother culture,” he said.

“Galacian football has unique values. You play with your home team all your life. You don’t get transferred for money. It is an amateur game. People in Galicia are sick of the classical sports .”

For that reason there are no plans to introduce hurling or camogie into the region as there are no equivalent sports that Spanish people play.

At present Galicians play nine-a-side Gaelic football because they have to play on municipal soccer pitches, but they hope in time to acquire a full-length 15-a-side pitch.

The Galicians are also attracted to what they call in Spain, “tercer tiempo”, or the “third half”, the social aspect of playing Gaelic football.

The Galician league started in 2013 and begins again in October, running through the winter months. This is unusual for GAA in continental Europe where most tournaments are run at weekends because of the logistics involved.

There is also a Galician team, the Spanish equivalent of a county team, which played in the recent GAA World Games in Waterford. The women finished third and the men’s team were knocked out by France in the round of 16.

Mr Negrete said he was “shocked” to see the profile of their games in a newspaper that is read by most sports fans in Spain. “It’s amazing publicity and marketing for us,” he said.

The Galician Gaelic football community has been quite publicity-savvy. Two years ago Enda Kenny presented a Galician GAA jersey to the then Spanish prime minister Mariano Rajoy. Rajoy is from Galicia.

“Five years ago if you said to people in Galicia that you play Gaelic football, they would say, ‘Gaelic what?’ Now they know that is exists. That’s real progress for us,” Mr Negrete said. “We now have to get more players on the pitch.”