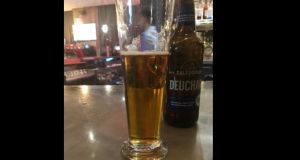 The beer that the journalist was accidentally charged £55,000 for at a Manchester hotel. Photograph: Peter Lalor/PA Wire

An Australian cricket journalist in Britain for the Ashes test series is claiming to have drunk “the most expensive beer in history” after being charged more than €60,000 (£55,000) for the drink.

Peter Lalor, chief cricket writer for the Australian newspaper, said he stopped for a drink at a bar in Manchester, northwest England, on Sunday ahead of the fourth Ashes test at Old Trafford.

Relaying the tale on his Twitter account, Lalor said he was not wearing his glasses, so he did not check the bill for the bottle of Deuchars IPA he ordered before handing over his bank card.

The rude shock came a few hours later when Lalor’s wife, at home in Australia, alerted him to the fact that 99,983.64 Australian dollars had been stripped from their joint account. Adding to the pain, he’d been slugged another 2,500 Australian dollars as a transaction fee.

See this beer? That is the most expensive beer in history.
I paid $99,983.64 for it in the Malmaison Hotel, Manchester the other night.
Seriously.

The operator of the bar, the Malmaison Hotel, was not immediately available for comment, but a spokeswoman told the Guardian newspaper it was investigating.

Lalor said the funds were drained from his mortgage offset account and he was surprised not have received any notification from his bank, which he did not name.

The transaction fee has already been refunded, but Lalor will have a “massive hole” in his finances for the nine working days it will take the larger amount to be returned.

As for the quality of the ale itself, which has won a number of awards, Lalor was ambivalent: “It was good, but not that good.” – Reuters