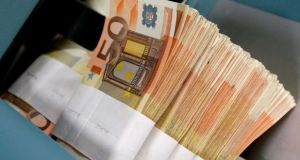 Man (36) being charged on four counts of money laundering

A male model is to stand trial on money laundering charges and accused of having €1.2 in alleged crime proceeds.

Mark Andrew Adams (39), with an address at Castleheath, Malahide, Dublin was arrested on Friday morning and charged with four offences under the Criminal Justice (Money Laundering and Terrorist Financing Act).

Bail was set at €11,000 and he must abide by strict conditions, Judge Walsh ordered, adding that he faced “particularly serious charges”.

It is alleged he had in his possession various sums which are alleged to have been proceeds of criminal conduct, amounting to approximately €1,186,900, over a five-year period.

Mr Adams, who was dressed in a blue suit, has not yet indicated how he will plead, and he remained silent during the hearing.

His court appearance follows and investigation by the Garda National Economic Crime Bureau.

Detective Garda Tom Victory told Judge Walsh the accused was arrested at Chancery Street in Dublin city centre on Friday morning. He was brought to the Bridewell Garda station.

He had nothing to say in reply to the charges, Detective Garda Victory said.

The case is to go before the Dublin Circuit Criminal Court, the judge noted.

There was also consent to the accused being sent forward for sentencing on a signed plea should that arise.

Defence solicitor Danny Nolan told the court his client was applying for bail and the judge noted there was no Garda objection, subject to a number of conditions being imposed.

Bail was set in his own bond of €1,000 cash and the judge required approval of an independent surety, in the sum of €10,000, of which half must be lodged in court.

Judge Walsh ordered the accused to reside at his current address with his mother and to sign on three days a week at Malahide station.

He told Mr Adams he cannot apply for new travel documentation, he had to provide gardai with his mobile phone number, and to be contactable 24 hours a day.

He was remanded in custody with consent to bail on these terms and will face his next hearing on September 13th. A book of evidence has yet to be completed by the DPP.