Funeral of Andrew Mann hears music was ‘his burning desire’

The musician was a Eurovision contestant and Voice of Ireland singer 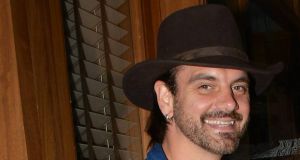 Andrew Mann was 44 and a father of two. Photograph: Cathal Burke/vipireland.com

The funeral of Voice of Ireland participant Andrew Mann has heard music was his “burning desire” since he was a child.

Hundreds of mourners gathered for the funeral mass of Mr Mann at the Church of Our Lady of Good Counsel on Churchview Road, Killiney, Co Dublin, on Thursday morning.

The 44-year-old father of two died suddenly last week. The musician had previously been in a relationship with model Alli MacDonnell, who also died earlier this year. They were the parents of a two-year-old daughter.

Mr Mann’s mother Maree Mahony told the congregation of her son’s love of his children and music.

“For Andrew, his life were his children – Jacob, whom he adored over the last 12 years and Siena, who he cared for day and night for the last few months of his life,” she said.

“A huge vacuum has opened up in our lives... Andrew is singing with the choirs of heaven and the angels in heaven now.”

Ms Mahony said her son was “a bit of a trickster” when he was in school and had no interest in sport.

“Andrew’s burning desire, from the first time he picked up his first guitar at 11 years of age, was music,” she said.

“His first gig was at our 25th wedding anniversary when he was 15. Some of the people here today shared a stage with him . . . Andrew really learned his skill as a musician by playing at prayer meetings, at mass, at christenings, weddings and funerals.”

Mr Mann’s father Ger Mahony said the past week had been a “very sad time for our family”.

“We have been greatly supported and encouraged and held up by our friends,” he added.

Gifts included a photograph of Mr Mann and his children, his guitar, a hat and a Lego set that his son had bought him for Christmas.

Mr Mann was previously a finalist to represent Ireland in the Eurovision song contest, but was best known in recent years for his appearance on the Voice of Ireland television show.