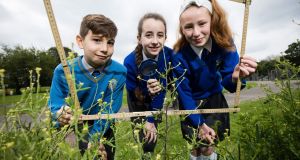 To celebrate UN International Biodiversity Day, the Lord Mayor, Nial Ring and the Director of Eco-Unesco, Elaine Nevin, joined the students of St. Joseph’s and St. Mary’s to launch Nature in the Park, a new self-guided handbook for primary school teachers to facilitate the use of local parks in Dublin city as outdoor classrooms. Photograph: Chris Bellew/Fennell Photography

A handbook for primary school teachers to facilitate the use of local parks in Dublin city as outdoor classrooms has been published to celebrate UN International Biodiversity Day.

Lord Mayor Nial Ring and Eco-Unesco director Elaine Nevin joined students at Fairview Park to launch “Nature in the Park”. It enables schoolchildren explore themes such as plants and vegetation; water and aquatic life and wildlife habitats. Dublin has internationally-important species and habitats, including the biosphere of Dublin Bay.

“It is wonderful how our young people care about their environment and want to learn about and protect the biodiversity of where they live for the future,” Cllr Ring said.

In this past month, Dáil Éireann had declared a biodiversity and climate change emergency while the sixth report to the UN Convention on Biological Diversity from Ireland confirmed potentially-catastrophic species loss and deterioration of globally-important habitats was accelerating, he added.

“Therefore, we must ensure that everyone is educated about our biodiversity and we must all work together to protect it for the children of today and for their future.”

ECO-UNESCO was delighted to have produced the guide with Dublin City Council, Ms Nevin said. “We believe that it is so important to encourage children and young people to get out into the natural environment and the parks are a perfect place for people to explore biodiversity in their city environment.”

Meanwhile the Community Foundation for Ireland has launched a €200,000 environment and nature fund, which invites community groups to apply for grants of up to €10,000 and work with ecologists and landowners “to develop and action community biodiversity plans” – see www.foundation.ie

The initiative was one of 40 key actions to address Ireland’s biodiversity crisis agreed at the first National Biodiversity Conference hosted recently by the National Parks & Wildlife Service and the Department of Culture, Heritage and the Gaeltacht (DCHG) at Dublin Castle.

To mark the International Biodiversity Day an interactive report on the conference, New Horizons for Nature, has been released which the organisers hope will be a useful reference tool for communities – it is available at www.biodiversityconference.ie

President Michael D Higgins’ now famous quote from the conference – “If we were coal miners, we would be up to our knees in dead canaries” – is featured on a new t-shirt produced by BirdWatch Ireland, which is being sold through its online shop with all proceeds going towards the NGO.

A new booklet to help communities save breeding Swifts has also been launched by BirdWatch Ireland and local authority heritage officers coinciding with National Biodiversity Week.

Swifts are a summer visitor to Ireland, arriving in early May following a long migration from southern Africa. Slightly larger than a swallow, they are a “site faithful” bird, returning generation after generation to buildings in towns and villages throughout Ireland to nest and raise young. They are increasingly threatened through loss of nest sites and have suffered a 40 per cent population decline over the past decade.

The guide funded by the DCHG to encourage projects under the National Biodiversity Action Plan, contains all the information required for individuals, local groups, schools, businesses and government departments to help the species. It outlines how to create new nesting sites such as by installing nest boxes or specially-designed nesting bricks. It is available at swifts@birdwatchireland.ie