Friendship between Ireland and UK will endure, says Prince Charles 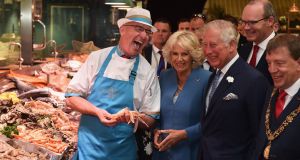 The friendship and understanding which have developed between Ireland and the United Kingdom over recent years will endure as the relationship between the two countries continues to evolve, predicted the Prince of Wales during his visit to Cork.

Speaking at a civic reception at Cork City Hall hosted by Lord Mayor of Cork Cllr Tony Fitzgerald, Prince Charles acknowledged the two countries had “travelled a troubled road along which many wrongs have been done” but he looked forward to an ever-growing friendship and closeness.

Quoting from Cork poet and theologian Padraig Ó Tuama, whom he met when he visited the Corrymeela Community in Northern Ireland three years ago, Prince Charles said Ó Tuama’s poem Shaking Hands makes reaching out an imperative of leadership.

“With reconciliation and understanding as our guide, we have found a new path to shared prosperity and security, and we are determined that we must never lose our way again,” he told an audience of 150 invited guests from various civic groups in the main auditorium of Cork City Hall.

“If I may say so, this is precisely why I have felt it of such importance that we should keep coming to Ireland – to demonstrate, in whatever small way we can, just how vital and valuable the ties between our countries are to us all,” he said.