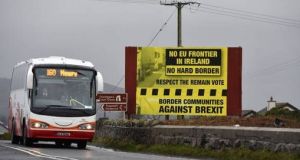 Campaigners for a united Ireland have called on the Government to prepare the ground for a Border poll in the coming years in the wake of a new survey showing strong support for the idea.

An RTÉ/TG4 exit poll conducted on Friday showed 65 per cent of all voters were in favour of a united Ireland, with 19 per cent against, and 15 per cent refusing to answer. When undecided voters were excluded, the proposal enjoyed 77 per cent support.

Fianna Fáil Senator Mark Daly said that the Government needed to “engage, sit down and talk about concerns” among unionists.

“We need to address the fears of the loss of identity and of land among unionist farmers. If that’s not addressed comprehensively that will be utilised by politicians for their own ends.”

He said Brexit, coupled with demographic trends that could leave unionists in a voting minority by the end of the decade, increased the likelihood of a united Ireland in the next 10 to 15 years. Failing to address issues of identity and representation before such a poll could lead to a damaging, even violent, fallout.

“Policy neglect seldom goes unpunished. The current policy neglect of the Government is reckless…they’re not giving a vision of what the future would look like, a new vision of a united Ireland.”

Meanwhile, the Irish Language Commissioner said the Department of Education was failing to meet the demand for Irish language schooling as indicated by responses to another question in the exit poll.

“The failure of the Department of Education to adequately meet the desire of parents to have their children educated through Irish is an impediment to the advancement of the language in Irish society,” Rónán Ó Domhnaill, who was appointed as An Coimisinéir Teanga in 2014, told The Irish Times.

“This issue was formally investigated by my office in 2017, and is a matter of grave concern that the department has not adequately advanced measures to ensure that the needs of parents are met in the future.”

The exit poll found that 60 per cent of those surveyed rated the importance of the Irish language as seven or higher on a scale where 10 means “extremely important”.

After the provision of Gaelscoileanna, the provision of Irish language TV was cited as the second most popular choice for protecting and promoting the language by exit poll respondents. Some 14 per cent identified it first.

A report by the office of the Language Commissioner, published earlier this year, identified Irish language output by RTÉ as “seriously deficient”. The report found that less than 1 per cent of programmes broadcast on RTÉ television are classified as Irish language programmes.

The poll, Mr Ó Domhnaill said, “shows the importance of the visibility of Irish, which makes the almost complete eradication of Irish language programming from the TV schedules of RTÉ quite concerning”.