Frederick Douglass: Push for Cork street to be named after anti-slavery activist

‘Commemorating Douglass now would send signal about how Cork is a vibrant, multicultural city’ 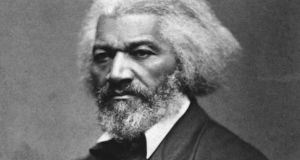 Campaigners seeking to have a street in Cork named after anti-slavery campaigner Frederick Douglass are hopeful of success as an online petition to honour the former slave gathers momentum while the 175th anniversary of his visit to the city approaches.

Dr Donal Hassett, a lecturer in the Department of French at UCC, who launched the campaign with his colleague Dr Caroline Schroeter of the Department of German at UCC, said honouring Douglass on Leeside would send out an important message about Cork in the 21st century.

“This year marks the 175th anniversary of Douglass’s visit to Cork when he spent three weeks in the city in October 1845, giving lectures on abolishing slavery, so we felt it was the right time for the city to honour this internationally renowned civil rights campaigner.

“And commemorating Douglass now would send a signal about how Cork is now a vibrant, multicultural city, particularly in the light of the conversations going on around Black Lives Matter – it would say Cork is an inclusive and tolerant city that embraces diversity.”

Born into slavery in Maryland in the US in 1818, Douglass managed to escape in 1838 and with the assistance of British abolitionists, bought his freedom before becoming a leading figure in the abolitionist movement, including serving as counsel to Abraham Lincoln.

Before that however, he had published his autobiography, A Narrative of the Life of Frederick Douglass, and embarked on an 18-month tour of Great Britain and Ireland which saw him arrive in Dublin on September 1st, 1845.

According to Prof Adrian Mulligan of Bucknell University in Pennsylvania, Douglass attended a rally in Dublin addressed by Daniel O’Connell where he admitted to being captivated by O’Connell, who delivered a speech championing Catholic Emancipation and abolitionism.

Arriving in Cork in October 1845, Douglass gave a series of well-attended lectures including one at Cork City Courthouse. He also met temperance campaigner Fr Theobald Mathew, who also supported abolitionism.

Dr Hassett said: “What’s interesting about Douglass’s visit to Cork was that the Cork economy at the time was quite connected to the slave trade – a lot of wealth in Cork in the 18th and 19th century had come from selling provisions to slave owners in the Caribbean.

“At the same time, Cork was also quite a strong centre of abolitionism – there were quite a number of activists in Cork campaigning for the abolition of slavery in particular among the Quaker community, and Douglass stayed with some Quaker families while in Cork.”

More than 3,000 people have already signed a petition asking Cork City Council to name a street or public space in Cork after Douglass and a number of councillors have also backed the move, but Dr Hassett explained that naming a street is not a simple process.

“It turns out that the process of renaming a street is very complicated and a requires a referendum of rate-payers in the area, so what we wanted to do is find a space in the city that isn’t officially named already or a publicly owned space that doesn’t have rate-payers.

“So we’re looking at St Peter’s Park on Grattan Street or the plaza at the junction of Adelaide Street and North Main Street – they are two places that you wouldn’t have to go through a full vote of rate-payers, so it would make it easier to commemorate Douglass.

“We are also hosting a creative commemoration event in February of next year involving local artists and one of Douglass’s great- great-great-grandsons, Ken Morris Douglass, who will hopefully travel to Cork for the occasion – so it would be nice if it could renamed for then.”