What’s on, how to get there, and weather for the Halloween bank holiday weekend 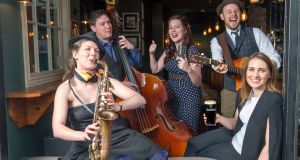 Tim O’Leary , Rob Foley, Grace Mc Mahon and Veronica Tedman of ‘One Horse Pony’ with Jennifer Gleeson, Guinness Cork Jazz Festival Manager at Goldberg’s bar, Alberts Quay, Cork tuning up for the tens of thousands of people who are arriving in Cork city from all over the world for the 40th year of the Guinness Cork Jazz Festival which runs from Friday through to Monday 30th October. Photograph: Michael Mac Sweeney/Provision

Weather: A misty, foggy start throughout will give way to dry and sunny conditions around the country. A largely pleasant day should ensue, with slack winds and temperatures of up to 15 degrees.

Events: The Cork Jazz Festival officially gets underway on Friday with upwards of 45,000 fans set to descend on over 70 venues across the southern capital. As always, the event features street bands, workshops, master classes and the annual jazz parade. Headline acts include Imelda May, the Swing Cats and King Kong Company.

The Bram Stoker Festival begins its four-day run in Dublin on Friday. A celebration of the literary legend who penned horror novel Dracula, it will involve film screenings, arts installations and family fun events throughout the city centre.

The Savour food festival in Kilkenny also starts on Friday, and promises cookery demonstrations from celebrated chefs along with a selection of culinary offerings.

Traffic and travel: Trains will only operate direct between Dublin Heuston and Tralee up to 5pm, and between Dublin Heuston and Cork Kent stations up to 6.30pm on Friday due to engineering works in Mallow. Iarnród Éireann customers are advised that trains will only go as far as Mallow thereafter, with bus transfers in operation between there and Cork/Tralee through Saturday, Sunday and Monday. Diversions will be put in place across main city centre thoroughfares in Dublin including Leeson Street, St Stephen’s Green and Patrick Street from Friday evening ahead of the marathon, and will continue until Sunday evening in some cases. There will also be disruptions to Dublin Bus and Luas services throughout the day.

Weather: Conditions will deteriorate from Friday, with a windy, cloudy day expected across most parts on Saturday. Top temperatures will stay around the 15 degrees mark, although mist and drizzle is expected on hills and Atlantic fringes.

Events: Halloween storytelling events are scheduled for Tramore and Athlone on Saturday evening, with Samhain festivals taking place at Weston Airport in Lucan and Hook Lighthouse in Wexford.

A pumpkin carving event for children begins in the historic Powerscourt estate in Wicklow, as does the Burren Food Fayre in Clare which runs over Saturday and Sunday.

Traffic and travel: Dart and Enterprise services will not operate anywhere between Dublin Connolly and Belfast on Saturday and Sunday due to essential engineering works on sections of the track. Dart will operate between Connolly and Bray/Greystones only over the two days, and valid tickets will be accepted by Dublin Bus.

Trains will run between Dundalk, Drogheda and Skerries, with bus transfers provided to the city centre. No Enterprise services will run, with replacement bus departures being provided between Dublin and Belfast instead. Buses will serve all stops along the Enterprise route.

Weather: Another cloudy, misty start is expected on Sunday with some patchy drizzle, but it should develop into a pleasant day with the mercury rising to 16c in parts of the south and east and little wind. It is due to turn chilly overnight, particularly in northern areas where grass frost may develop.

Events: Sunday marks the occasion of the 2017 SSE Airtricity Dublin Marathon, with around 20,000 participants set to take to the capital’s streets in an attempt to tackle the gruelling 42-kilometre course.

The route will snake its usual path from Fitzwilliam Street, through the south city and onto the Phoenix Park, before running through Drimnagh, Terenure, Belfield and Ballsbridge and finishing in Merrion Square.

Elsewhere, Macnas Parade once again takes place in Galway on Sunday evening with the customary Macnas giants set to participate in the procession.

SSE Airtricity Marathon
The first wave of marathon participants will depart Fitzwilliam Street at 9am on Sunday morning, running a 42km route that takes in areas including the Phoenix Park, Chapelizod, Drimnagh, Terenure, Belfield and Ballsbridge before culminating in Merrion Square.

The last of the runners are expected to come in at around 5pm.

The finishing point at Merrion Square North is the first to be affected by traffic curtailments, and will be closed from 7pm on Friday all the way until 4pm on Monday.

The south side of the square will close to traffic from 6am on Saturday, with a raft of routes including Fitzwilliam Street, Holles Street, Baggot Street, Mount Street, Kildare Street and James Street closing from 4am on Sunday.

A further wave of city centre road closures will come into effect for Leeson Street, Patrick Street, Ushers Quay and Stoneybatter as well as other locations further out on the race route from between 8am and 10.30am on Sunday.

Those attempting to navigate the city centre on Sunday afternoon and evening are warned to anticipate diversions up to 7.30pm in many cases.

Commutes are asked to check the status of their route on the DublinBus.ie website prior to departure.

Delays are also expected for Luas trams at intervals along the route.

Dart services will only operate between Connolly and Bray/Greystones on Sunday due to essential line maintenance works.

Dublin Bikes stations on Merrion Square, Fitzwilliam Square and lower Mount Street will be closed between Friday and Monday.

Participants are reminded that only the authorised clear bag will be accepted in the baggage area on race day, and no rucksacks will be allowed. They can collect bib numbers, pins and number stickers from the RDS in Ballsbridge on Friday and Saturday.

Weather: Northern and western areas can expect the worst of the weather on the bank holiday with cloudy skies and persistent rain the order of the day, but some bright spells may occur in Munster and south Leinster where highs of 15 degrees are expected.

Events: The bank holiday festivities continue onto Monday with the Blackrock Pumpkin Carnival taking place in the Co Louth seaside village, and Cork City Gaol will be hosting a Halloween evening.

The annual Spleodar Halloween Arts Festival in Nenagh continues on Monday with arts and culture events scheduled across the weekend, culminating in a fireworks display on Halloween night.

Traffic and travel: Bus transfers will continue to operate between Mallow and Cork/Tralee due to rail line improvement works, with full train services set to resume after 1pm.