Flooding Q&A: How bad is it and can it get any worse? 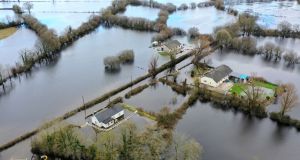 Where is worst affected?

South Galway, Athlone and Carrick-on-Shannon are some of the worst affected areas. Parts of Co Clare, Roscommon, Longford, Limerick, Offaly and Sligo are also badly affected.

Why is there flooding?

According to Met Éireann, in the last two weeks there has been 119mm (4.68in) of rain around the Shannon area, nearly four times the usual for this time of year. There has been 74mm of rain in the past seven days in the same location.

Dr Mary Bourke, from the department of geography in Trinity College Dublin, says flooding along the basin of the river Shannon is “not just down to the rain”.

“We have changed so much of the surface that we have actually changed the ability of rain to sink into the soils . . . our management of land in some places, not all, is inhibiting rain from infiltrating into the soil,” she says.

“It’s a combination of climatic systems but also of the human footprint on Ireland’s landscape.”

How bad is the flooding?

Not as bad as 2015 or 2009, says Pat Murphy, the Irish Farmers’ Association Connacht regional chairman.

“Last Monday, we were still 14in back from the record levels we saw in 2015. However, there is a bad forecast for this weekend. The problem is the water levels are still rising. It mightn’t be raining today but the water hasn’t drained.”

What alleviation measures are in train (short term and longer term)?

Details of flood-risk and proposed measures for each of the 300 communities is set out in 29 risk-management plans, one for each river basin.

The Defence Forces are on standby to provide help to flooded areas and have already done so in the midlands and southwest of the country.

What are the solutions. What do the experts say?

Dr Bourke says there has to be change from Government level right down to communities in order to mitigate floods as well as a move away from the “hard engineering approach” to “more nature based or sustainable approaches”.

“My research group in Trinity is looking into the opportunities to trap some of the water before it reaches the river, to slow it down, to slow the flow and there’s lots of effective ways of doing that,” she says.

“People who own agricultural lands have opportunities on their lands to put in very low cost and sometimes rather invisible structures that can be very effective in retaining flow waters for a short period of time.”

Don’t we have a minister for flooding?

Kevin Boxer Moran is the Minister of State with special responsibility for the Office of Public Works and Flood Relief.

Moran lost his Dáil seat earlier this month but retains the portfolio in the absence of a new government. He called for a farm recovery grant on Thursday, to assist farmers struggling with livestock and damage to farm buildings during the current flooding events.

“The UK government have launched a similar fund in recent days and I believe that we should do the same here,” he said.

What is the forecast for the coming days?

There is more rain forecast for Friday, Saturday and Sunday. Met Éireann meteorologist Joanna Donnelly says there is expected to be twice the normal amount of rain for this time of year on Saturday.

However, she said the amount of rain “wouldn’t be at warning level amounts”. “At the moment it’s not looking like it will reach warning levels but it’s an evolving situation so we’ll be monitoring it.”

Met Éireann issues rainfall warnings if there is more than 25mm of rain forecast over a 24-hour period.