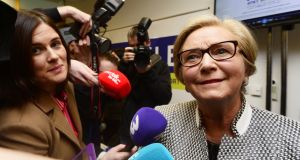 Tánaiste Frances Fitzgerald’s canvass only started earlier this week after she gave her firmest indication that she will run for leadership. Photograph: Cyril Byrne

Tánaiste Frances Fitzgerald has begun sounding out Fine Gael TDs and Senators to see if she should compete for the leadership of the party when Enda Kenny stands down.

The Minister for Justice has been “doing the rounds” of the Leinster House offices of Fine Gael parliamentary party members in recent days, sources say.

Fine Gael rules stipulate that leadership contenders must be nominated by eight members of the parliamentary party – TDs, Senators or MEPs – in order to get into the contest proper.

The Irish Times understands the Tánaiste’s canvassing only started earlier this week after she gave her firmest indication that she will run for the leadership.

Some sources said she was asking for support to allow her candidacy to proceed, but not necessarily for the votes of TDs and Senators at the conclusion of the contest.

“She is looking for support to put her name down, but she did not ask for an actual vote,” said one party figure. “I think she is making it out that anyone who wants to run should be allowed to run.”

A Fine Gael source said: “She was going from office to office. She was going around for a substantial amount of time.”

It is understood, however, that she has not asked Minister for Health Simon Harris, her political protege, for his backing. Mr Harris is expected to eventually support Mr Coveney.

A Minister said: “She was around the TDs’ offices during the week asking for advice as to whether she should throw her hat into the ring.”

One TD said that many deputies and Senators will be reluctant to back Ms Fitzgerald’s candidacy because it could hurt their future prospects under the leadership of Mr Varadkar or Mr Coveney. “Why would you do that and annoy the two lads?” the deputy asked.

Mr Kenny has said he will “conclusively” deal with his leadership of the party when he returns from the United States for the annual St Patrick’s Day visit. It is widely expected he will initiate a leadership contest, which will take just under 20 days, soon after his return. He has not given a firm date as to when he will do so.

On Monday, Ms Fitzgerald said she was “very seriously” considering running to replace Mr Kenny and, when asked if she could gather the required nominations to enter the contest proper, she said: “I’ll deal with that when the time comes.”

She said it would be healthy for Fine Gael to have a “good debate”. “The last time there was a Fine Gael election for leader there were four candidates. But right now, the Taoiseach is in place and I await further developments before I say anything else.”