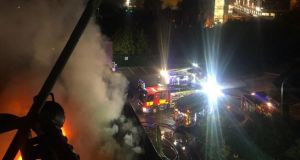 Fifteen people had to be evacuated from a nearby public health building attached to the industrial estate. Photograph: Cork Fire Brigade

Calls have been made for the redevelopment of a derelict industrial building on the northside of the city after the third fire on the site in recent months.

Nine units from Anglesea Street, Ballyvolane and Ballincollig fire stations spent much of Sunday night containing the blaze at the Sunbeam Industrial Estate in the Blackpool area. The fire is strongly suspected to have been caused by arson.

A 32-metre hydraulic platform, which can deliver more than 2,000 litres of water a minute, was used to quench the flames.

The alarm was raised at around 5.30pm on Sunday. Fifteen people had to be evacuated from a nearby public health building attached to the industrial estate. Two units of the fire brigade remain on-site this morning.

3 units remain at the scene of the fire in Blackpool extinguishing hotspots.

Sinn Féin councillor Thomas Gould has made calls for the area to be redeveloped as a matter of urgency. He told Cork’s 96FM that Compulsory Purchase Orders need to be used by Cork City Council in cases where sites remain unused for extensive periods of time.

”I am very disappointed to see the old Sunbeam building on fire again. This is the third fire on the site in recent times.

“This site has been derelict for years on and off. There has been talk about planning at this site. What I am thinking about is the officers who had to go out and tackle this fire because of Cork City Council and landlords not doing the right thing and using these properties.

“We are endangering the fire service. Why is Cork City Council allowing this to happen when it has the power to compulsory purchase derelict sites and use them to build housing?”

In 2017 Cork City Council commenced a process of acquiring a number of derelict properties, particularly houses, in situations where the owner was co-operating in clearing the dereliction. It is understood efforts are underway to speed up the process.