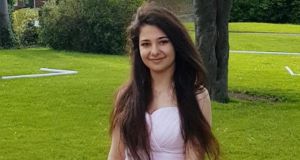 Nour Aljarad, who was granted asylum in Ireland in 2015 with her family, has secured a place to study dentistry at Trinity College in September.

A 17-year-old student who arrived in Ireland from Syria four years ago with only basic English skills has scored more than 600 points in her Leaving Cert.

Nour Aljarad, who was granted asylum in Ireland in 2015 with her family, has secured a place to study dentistry at Trinity College in September.

Ms Aljarad has always been interested in dentistry, however, she says it was the “artistic side” of the profession that led her to select it as her first choice on the CAO form.

“I always like makeup and I saw dentistry as a form of art. It fascinated me how a person’s smile can boost their confidence. I have friends with braces who talk about how excited they are to smile when they come off.”

Her love of science also played a role in the decision. “I’ve loved science since day one. I had amazing teachers who talked about science so passionately, it was impossible not to like it with them around.”

Last week, on August 13th, Ms Aljarad and her parents drove the short distance from their Stillorgan home in Dublin to St Raphaela’s secondary school to collect her results. After months of stress, exhaustion and tears Ms Aljarad was still deeply unsure whether she had achieved the high points necessary to secure a place at Trinity College. “I thought there was no way I could get 590. I knew the points were crazy for dentistry.” She was totally shocked to discover that she had, in fact, scored 602 points with H1s in five of her subjects - chemistry, physics, biology, Arabic and Japanese, which she started learning two years ago.

“When I first got the envelope I kept it for myself, I didn’t want anyone else to look at it. But then I saw all the H1s and thought this is amazing. I was jumping for like an hour, I was over the moon. My mum is still jumping!”

Ms Aljarad was 12 years old when she, her parents and two older sisters left Damascus. The family spent their first few months in Ireland at the Ballyhaunis direct provision centre in Co Mayo before moving to Dundalk. During this time Ms Aljarad and her sisters attended two different schools.

In November 2015, the family’s story appeared in the Irish Times New to the Parish series where they spoke about their struggle to find a house in Ireland. Shortly after the article appeared, a member of the Stillorgan-Kilmacud parish came forward with an offer that the community pay housing and education bills for the family for two years. Convincing a landlord to rent a home to the Syrian family was difficult but eventually, in spring 2016, the family unpacked their bags.

“Every time we started to settle we had to move to another place,” remembers Ms Aljarad. “But then we finally went to St Raphaela’s. It probably took all of second and half of third year to have the confidence to speak English. But as I found friends I was comfortable to be around my language got better and I become more familiar with the system. Plus, people were so nice to us.”

Without the support of the Kilmacud community, Nour doubts she would be in the position she is today, about to embark on her university studies in Dublin. “They definitely made things easier for us and helped my family a lot. They made them stronger and provided support. I know without them we definitely wouldn’t be here today. They’re still a huge help and a big part of our life. They made me feel stronger, made my family feel welcome and less homesick than we would have been.”

The family has applied for Irish citizenship and is waiting anxiously for news on their application. Ms Alhjarad still misses home and often reflects on the friends and family she left behind. “I’m not going to lie, I do get homesick. But Ireland definitely feels like home now. I don’t say I’m 100 per cent Syrian anymore, I’m half Irish now.”