Exhibition to honour those who suffered in Magdalene Laundries 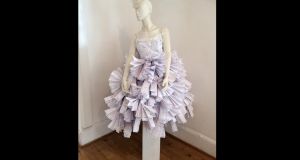 Stay with Me, which opens in the Aula Maxima, is a group art exhibition which brings together the work of 20 artists and survivors who felt compelled to create artwork in response initially, to the tragic story of the Tuam Babies. Photograph: Olivia Kelleher/UCC

A new exhibition which seeks to honour and remember all those who suffered in Ireland’s Magdalene Laundries, mother and baby homes, and industrial schools, will open on Monday at University College Cork (UCC).

Stay with Me is a group art exhibition which brings together the work of 20 artists and survivors who felt compelled to create artwork in response to the tragic story of the Tuam Babies.

The works include installations, paintings and sculptures, as well as printed poetry and jewellery.

The exhibition also has four large baby blankets, which were knitted by 300 men and woman to create 800 squares for the corresponding number of Tuam Babies.

One of the artists involved in the project is Sheila O’Byrne. In 1976, when Sheila was 19, she was sent to St Patrick’s Mother and Baby Home on Dublin’s Navan Road. She was only reunited with her son last year.

Dr Rachel MagSamhrain of UCC, who is one of the organisers of the exhibition, says while this issue has received extensive media coverage, the emotional impact of what occurred is hard to communicate.

“It is here that artistic responses have a function, and this is the exhibition’s mission.”

Galway historian, Catherine Corless, will be the guest of honour at the public launch of the exhibition today at 5pm in the Aula Maxima in UCC.

Research by Catherine Corless on the Tuam Mother and Babies home, led to the establishment of the Mother and Baby Homes Commission of Investigation.

In 2017, the State Commission of Investigation into Mother and Baby Homes reported that its excavation in Tuam had found “significant quantities of human remains” in a 20-chamber underground structure.

That Commission’s fifth interim report, published in April this year, revealed that thousands of children died in mother and baby homes, and few received proper burials.

Stay With Me is the brainchild of Alison O’Reilly, the journalist who broke the Tuam Babies story, with the assistance of journalists Donal O’Keeffe and Philip Boucher-Hayes. The exhibition will run until August 23rd at UCC.