Community to remain in homes for Christmas but remedial costs set to hit €1.78m 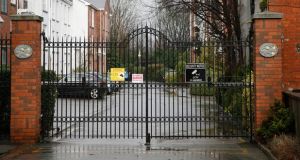 Residents at an apartment block in Dublin 8 that was found to have serious fire safety problems will not be forced out of their homes before Christmas, but they will face a big bill shortly after.

An initial survey of St James Wood in Kilmainham was carried out by the fire prevention officer on Monday and early indications “have not suggested that residents will be evacuated”, according to Dublin Fire Brigade.

A report by the fire officer “is awaited”, said a spokeswoman for Dublin Fire Brigade said on Tuesday morning.

Apartment owners were given a revised €1.78 million bill on this morning to remedy multiple and widespread problems. These include deficient lighting and alarm systems and walls incapable of containing a fire in one of the apartments for the required length of time.

Core Estate Management wrote to owners to update them on the requisite costs, which are down from the €3 million previously quoted.

“We are happy to confirm that significant price efficiencies have been found, without compromising the health & safety or legislative requirements for the property,” wrote the management company.

Minutes from previous management meetings said residents should be able to stay in their homes while the work is carried out.

It is unclear if the proposed works satisfy the Fire Prevention Officer.

Orla Hegarty, an architect and an assistant professor at the school of architecture at UCD, said issues around inadequate fire detection and alarm systems and incomplete fire compartmentation, as seen at St James’s Wood, can be very dangerous.

“If the compartmentation between apartments is broken by service runs or other breaches in the walls and floors, it means that a fire will not be contained in one area. And this reduces the time for people to escape from other parts of the building.”