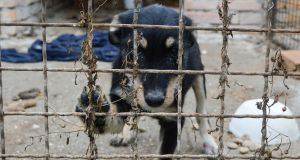 Animal welfare officers are searching vehicles arriving from Ireland by ferry in a crackdown on the illegal puppy trade in Scotland.

The Scottish SPCA said thousands of puppies arrive in Scotland from Northern Ireland and the Republic of Ireland every year.

Inspectors were at Cairnryan ferry port near Stranraer on Tuesday to search vehicles coming in from Belfast and Larne.

The activity is part of Operation Delphin, which the Scottish SPCA is spearheading with support from Police Scotland, HM Revenue and Customs and Dumfries and Galloway Council.

Signs a dog is from a puppy farm include being unable to see its mother and the absence of any paperwork for vaccinations or microchipping.

The head of the Scottish SPCA’s special investigations unit, who cannot be named, said: “This operation is based on intelligence and research, and searching vehicles as they arrive in Scotland allows us to take illegal puppy farmers by surprise.

“Intelligence we have collected has revealed that ferries are a particularly common way of smuggling puppies into the country and today’s operation shows how we are actively working to tackle this.

“Our goal is to highlight the issue to travellers and the general public and to rescue dogs and puppies through working with our partners to identify breaches in regulation.”

As part of Operation Delphin, the Scottish SPCA previously seized 27 puppies from illegal traders at Cairnryan in May.

The charity also raided a puppy farm in north-east Scotland in November last year and recovered more than 100 animals.

Representatives from the Scottish SPCA will be at the Scottish Parliament on Thursday to discuss its “Say No to Puppy Dealers” campaign. PA