Government stonewalls: Taxpayers so far given no explanation for massive cost overrun 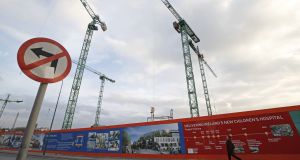 The National Children’s Hospital under construction at St James’s in Dublin is well on its way to becoming the most expensive hospital in the world, yet the taxpayer has been given no explanation for the massive cost overrun.

For several months this newspaper has been seeking details of the mounting cost of building the hospital only to be stonewalled by spokespeople for Minister for Health Simon Harris and the project team itself.

Finally last week, The Irish Times reported that the projected cost of the hospital is now €1.4 billion, more than twice the €650 million estimate used when planning permission was given two years ago. That points to the projected cost going up by almost €1 million a day.

Is this the worst of it, or could the sum climb even higher toward €2 billion?

It is a staggering amount of money, second only to the Royal Adelaide Hospital’s €1.5 billion outlay in terms of cost for a hospital and well ahead of the Australian facility in terms of per-bed cost – about €3 million versus €1.9 million in Adelaide.

We were told at the time the tendering process was “highly competitive”, and that the tenders were independently peer-reviewed by construction experts familiar with big projects.

We were also told that the estimated cost included provision for inflation, Vat and contingencies – though construction inflation has doubled approximately to 7 per cent since 2014. Given the improvement in the economy, this was hardly unforeseeable.

So what has gone wrong?

Is this the worst of it, or could the sum climb even higher toward €2 billion? And what exactly are we getting for this €1.4 billion?

People are entitled to detailed answers. The impact of this swollen cost overrun is being felt throughout the health service, in every part of the country.

Wondering why your local hospital has so many patients on trolleys? Blame the children’s hospital for eating into the capital budget and delaying the provision of new beds.

Wondering why the X-ray machine was broken on your last hospital visit, or why the ambulance was late bringing you there? Blame the children’s hospital overrun for hovering up the money that should have gone to funding badly-needed replacements for clapped out equipment.

A series of reports published by the Health Information and Quality Authority (Hiqa) on Monday illustrate the pressures on cash-starved hospitals. In Naas hospital inspectors found endoscope and disinfection equipment was up to 12 years old, well beyond its natural lifetime. The hospital received only 17 per cent of what it asked for for equipment replacement this year, and has had to curtail services at times because of a lack of equipment.

In Mercy hospital in Cork, which this year suffered an infection outbreak caused by an antibiotic-resistant superbug, one piece of equipment was more than 15 years old, while in St Michael’s hospital in Dún Laoghaire the equipment varied in age between nine and 13 years.

But the splurging of available funds on the children’s hospital may impact on other big projects, notably the planned move of the National Maternity Hospital to St Vincent’s and the development of big oncology projects in Cork and Galway.

Society can debate the ethos of the new maternity hospital to its heart’s content but it will never be built without the necessary funding (the cost estimate here too has already doubled).

Ministers have been promising new hospital developments in a number of locations in recent months – Bantry and Limerick, for example – yet these also will not materialise if the kitty is bare.

Earlier this year Harris tried to convince the Department of Public Expenditure that spending from his €11 billion 10-year capital plan should be “re-profiled” – front-loaded, essentially – so that more of the money is available earlier in the plan. However, his plea was rejected, so the Department of Health will have to work within the existing parameters of the plan.

The quoted price for the new National Children’s Hospital does include the cost of building two satellite health centres in Blanchardstown and Tallaght, but it is less clear whether it also includes the cost of fit-out and IT. The rule of thumb in large construction projects is that it costs as much to fit out a building as it does to erect the shell, so the sums of money potentially involved are considerable.

Big construction projects these days tend not to be awarded on a fixed-price basis due to the number of variables involved. For the National Children’s Hospital contractors were asked to price for the job by providing rates to an appointed quantity surveyor rather than a fixed price.

This pricing was based on preliminary drawing that lacked detail and have since been revised substantially, according to one source familiar with the process.

Other factors may include delays, the extra cost of building on a brownfield site and the level of spec ordered for the building. Yet in the absence of hard information it is impossible to be certain why this project is costing so much, though it is easy to be mystified.