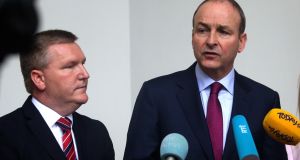 Fianna Fáil will increase public spending over and above what was agreed with Fine Gael in the confidence and supply deal, with finance spokesman Michael McGrath saying his party wants to tackle problems such as homelessness.

Mr McGrath said the overall split in the party’s economic package, the details of which will be announced in the coming days, will be heavily tilted towards increasing spending.

The Cork South Central TD, however, said the party will commit to some income tax reductions if it is government after the election.

The confidence and supply deal committed both Fine Gael and Fianna Fáil to passing budgets which were split on at least a two thirds to one third basis in favour of spending increases.

At a campaign event on the economy and Brexit, Mr McGrath said the final budget of the Fine Gael-Labour Party coalition was evenly split between tax cuts and spending increases. He was joined by Lisa Chambers, Fianna Fáil’s Brexit spokeswoman, but Sean Haughey, the party’s spokesman on foreign affairs spokesman, was not present.

“Over the last four years not only did we support prudent budgets, we actually stopped the damage that would have resulted from Fine Gael’s regressive an unsustainable tax policies,” Mr McGrath said.

On his party’s overall budgetary approach, Mr McGrath said: “The overall emphasis will be on not just protecting but improving frontline public services.

“When it comes down to making choices, Fianna Fáil will prioritise tackling, in a meaningful way, those issues.

“The overall emphasis will be on expenditure. There will be a tax package. If you were to do nothing on income tax, then with rising incomes and a static tax system, then people will end up paying more tax so there will need to be movement in relation to income tax but the overall priority is on public services.”

When asked if Fianna Fáil will commit to spending more than outlined in the confidence and supply deal, Mr McGrath said: “I believe the emphasis will even be further on investment in public services at the end of the day.”

Fine Gael has sought to highlight its Brexit team of Taoiseach Leo Varadkar, Tánaiste and Minister for Foreign Affairs Simon Coveney and Helen McEntee, the Minister of State for European Affairs.

Ms Chambers said yesterday’s comments from Fine Gael’s Heather Humphreys – that Fianna Fáil has a “Junior B” Brexit team – was a “play that was poorly executed by the Minister, and it went down like a lead balloon”.

When asked where Mr Haughey was for the Brexit event, Ms Chambers said she assumed he was canvassing like other candidates.

Fianna Fáil has split Brexit away from the foreign affairs portfolio in opposition, with two frontbench spokespeople having responsibility for each subject.

“Within the Fianna Fáil party, Brexit and foreign affairs are two distinct and separate portfolios but obviously we work together,” Ms Chambers said.

She said Cabinet appointments are “a matter for the Taoiseach of the day”. The party position is that the minister for foreign affairs will be the Government lead on Brexit in a Fianna Fáil-led administration.