Female cyclists complain of harassment on the roads by young men 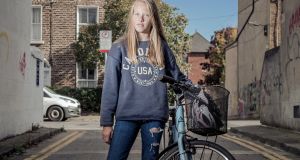 The #andshecycles campaign aims to get teenage girls back on their bikes In Ireland, fewer than one in 250 girls cycle to school each day. Photograph: Ste Murray

Fewer than one in 250 girls cycle to school every day, according to An Taisce, and those who do cycle say they are dealing with “harassment on the roads from drivers and young men”.

The environmental charity has launched a campaign #andshecycles through its Green Schools initiative to try and encourage more teenage girls to cycle and discuss why they do not.

Research carried out on behalf of the organisation found young women are dealing with peer pressure, harassment from drivers and young men and a perception that cycling is “uncool”. Lack of cycle lanes and safety concerns were also raised by participants.

An Taisce said the campaign hopes to change and challenge some of the issues raised through video, social media and continued liaison with students.

Jane Hackett, manager of the Green Schools travel programme said: “We have been working with schools around the country to increase cycling numbers for over ten years.

“Because of this work we realised that although teen girls wanted to cycle the numbers weren’t increasing at the same levels as their male counterparts. So we asked why, and #andshecycles was born.”

An exhibition of portraits of young women with their bikes taken by photographer Ste Murray will be on show from 4pm on Thursday at the Science Gallery to officially launch the campaign.

The exhibition will be followed by a showing of the campaign video and a panel chaired by RTÉ 2FM DJ Tara Stewart. An Taisce is planning to host similar events outside Dublin.