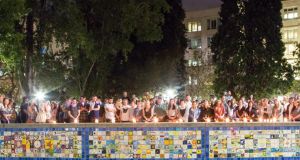 Participants at a vigil for the victims of the Berkeley Tragedy at Martin Luther King Jr. Civic Center Park in Berkeley, California. Photograph: Martin Lacey. 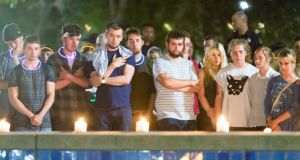 Participants at a vigil for the victims of About 200 people attended the month’s mind vigil just two blocks from where six students were killed and seven were injured in the tragedy on June 16th. Photograph: Martin Lacey. 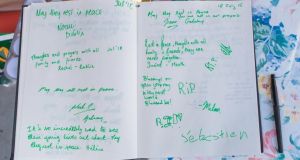 A page from one of the condolence books at the memorial on the street where the Berkeley tragedy occurred. Locals have been maintaining the memorial and providing fresh flowers. Photograph: Martin Lacey.

Family members of students killed and injured in the Berkeley balcony collapse met emergency responders who attended the scene of the accident for the first time at a month’s mind vigil in California last night.

About 200 people attended the vigil at the Martin Luther King Jnr Civic Centre Park in downtown Berkeley, just two blocks from where six students were killed and seven were injured in the tragedy on June 16th.

Family members were joined at the vigil by paramedics, police officers, fire department staff as well as doctors and nurses still treating four of the injured in two hospitals in the San Francisco Bay Area.

The vigil was attended by Conor Flynn, one of the seven students injured in the accident who is unable to travel home due to a punctured lung.

They silently carried lit candles in a procession down to the centre of the park, laying them by the wall in front of 13 white roses, one for each of the dead and the injured.

The scene evoked the memory of the vigil held by hundreds of Irish J-1 students in the same public park the night after the tragedy.

“Since June 16th we have been bonded together as a family,” Irish Consul Philip Grant told the gathered crowd. “This occasion of the month’s mind is an opportunity to bring our family back together.”

The vigil was attended by George and Jackie Donohoe, parents of Ashley Donohoe (22), of Rohnert Park, California, one of the six victims of the balcony collapse. Her sister Amanda also attended along with other relatives and close friends.

Ashley Donohoe along with five 21-year-old Dublin students - Eimear Walsh, Eoghan Culligan, Lorcán Miller, Nick Schuster and Ashley’s cousin Olivia Burke - died when the fourth-floor balcony they were standing on collapsed as they were celebrating a 21st birthday.

Ms Donohoe’s family distributed circular glow sticks for participants to wear, bringing colour to the occasion that felt as much a celebration of the bright lives of those who died as well as a reflection on the tragedy of June 16th.

The crowd stood quietly in front of the lit candles for about half an hour, some sobbing and wiping tears away, some clutching others for solace.

Prior to the vigil, family members enjoyed food and drink at a reception with Berkeley emergency staff and others from the San Francisco Bay Area, including members of the Irish community who have helped them and the injured students over the past month.

“It is an opportunity for us and the families to reach out to all of those, particularly the emergency services, staff at the hospitals, the first responders who came to our assistance,” Mr Grant told reporters.

“The people behind me are the people made the impossible possible in Berkeley in the immediate aftermath of when the balcony came down. We wanted to gather everybody together and this is the most appropriate time to do it.”

The families had been unable to thank those who had helped their children on the morning of the accident until last night, he said.

“It is a sad day but it’s also a day when we celebrate the progress that’s been made by the seven survivors and the extent of that progress is a testament to an amazing level of care that they received,” he said.

Another of the injured students, Jack Halpin, flew home to Ireland over the weekend. He is the second of the injured to leave California. Sean Fahey flew back to Dublin the week after the accident.

One attendee at the vigil was Dr James Crew, chair of the physical medicine and rehabilitation department at the Santa Clara hospital.

The recovery period for the three young women would be at least a year, he said, and that the timing of their return to Ireland would be different in each case. For two of them it would be a matter of weeks rather than months before they could return to Ireland, he said.

“Our efforts are really try to medically stabilise them as much as possible, to treat their pain and to try to work with them and their families through often times of very challenging prognosis and outlook,” he said.

Berkeley Mayor Tom Bates and other senior public figures from the California city across the bay from San Francisco attended the vigil.

Gil Dong, Berkeley Fire Department chief, said he still had officers who were talking about the tragedy as they passed the scene of the accident every day. They were getting “crisis intervention” to cope with the trauma of what they saw on that early morning last month.

“We are still talking to them and making sure they can adapt to what’s a new norm. Once you experience this it is something that you will reflect on for the rest of your career or your life,” he said.

A number of officers are trying to organise a group of fire department staff to travel to Ireland for St Patrick’s Day next year instead of their annual trip to New York for the festivities.

“They want to bring some of Berkeley back to Ireland,” said Mr Dong.

Another attendee at the vigil, Mike Meehan, Berkeley Police Department chief, said that his officers were liaising with the Alameda County District Attorney on her investigation into the accident.

Since the accident, his department was looking back and assessing what more would they can do to help the victims’ families.

“Our goal certainly is to make sure that the families feel that every part of the investigation has been thorough and comprehensive and whatever is to be found is found,” he said.

“That is the least that we can do for the families since we can’t bring anybody back.”