Families disappointed Amhrán na bhFiann will not be protected by law 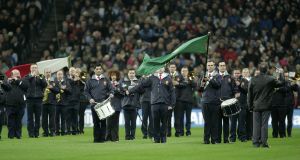 A Seanad committee has considered the status, treatment and use of Amhrán na bhFiann in a new report.

Descendants of the creators of Amhrán na bhFiann have expressed disappointment that the national anthem will not be enshrined in Irish law after a Seanad committee opted instead to introduce protocols surrounding its use.

The State currently has protections for the Irish tricolour and the symbol of the harp. The tricolour is protected by international copyright, whereas the harp has been patented by the State. Copyright on Amhrán na bhFiann expired in 2012.

The committee said it considered requests for the copyright to be renewed, as well as what should be classed as misuse of the anthem, and whether its use for commercial purposes, such as for advertising, should be restricted.

Following advice from the Attorney General, it was decided that extending the copyright to bring it back under the control of the Department of Finance would run contrary to both national and European copyright legislation.

“On balance, the committee considered that legislation was not required at this point in time, but notes that this step could be considered into the future once the protocols are implemented,” the report said.

The Minister for Finance will have responsibility to publish protocols, but the committee made a number of recommendations. They included that permission should be sought from the Government to use the national anthem for advertising purposes.

Permission may be granted by the Department of Finance under condition that the tune or the words not be modified, parodied or demeaned. Also, alternative words cannot be substituted for the words of the anthem.

The protocols would also include versions of the anthem in Irish, English and Irish Sign Language. Furthermore, every primary and secondary school should be provided with copies of the anthem in all three forms and encouraged to perform them.

Speaking after the launch of the report, Conal Kearney, grandson of Peadar Kearney who wrote the lyrics in 1909/1910, welcomed the work of the committee but expressed disappointment at the absence of legislation.

“I respectfully requested that the anthem might be given the legal protection, equal to the status of the tricolour and the harp as an equal symbol of state, that I believe it so rightly deserves,” he said.

“I have to admit I’m a little disappointed that that’s not one of the recommendations but be that as it may I think it’s a start. It is my belief and my family’s belief that it should have legal protection.”

Mayor of Dublin Nial Ring, grandnephew of Liam Ó Rinn who translated the song to Irish in 1916, said he hoped the protocols would be “a stepping stone” to full legislative protection.

Committee chairman Senator Paul Coghlan said the committee was “mindful” that placing restrictions around the use of the national anthem “may impact on freedom of expression rights”.

“The committee was unanimous, therefore in their agreement, that no sanctions or penalties should be put in place in relation to the use of the national anthem,” he said.