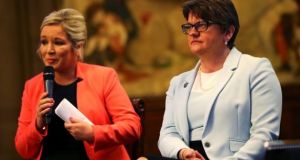 Michelle O’Neill (L) says it took Theresa May two years to work out Brexit path and ‘just two weeks to scupper her plan to placate her own backbenchers and the DUP’. File photograph: Hannah McKay/Reuters

The party’s deputy president Michelle O’Neill made the comments following MPs’ approval of a number of amendments to a customs Bill which Conservative Remainers tabled in protest against prime minister Theresa May’s Chequers proposal for a soft Brexit.

The British government accepted the amendments rather than risk a rebellion by the Brexiteers, who regard the Chequers plan as a betrayal of the 2016 referendum.

One of the amendments makes it unlawful for Northern Ireland to form a separate customs territory to the rest of the UK. British treasury minister Mel Stride said the government accepted the amendment because it reflected its policy on the Border backstop and its interpretation of the joint report agreed with the EU last December.

The EU’s backstop proposal would treat Northern Ireland as part of the EU customs union, but Britain has proposed that any backstop should apply to the UK as a whole.

The EU’s position remains that, without an agreement on the backstop, there will be no withdrawal agreement and no transition period after Brexit.

Ms O’Neill said the British government was “playing a game of political gymnastics and accused Ms May of “tearing up” her own proposal.

“It took her two years to get to that point and then just two weeks to scupper her plan to placate her own backbenchers and the DUP,” she told RTÉ’s News at One.

The MLA representative for Mid Ulster said the implications and the ramifications of a hard Brexit will be felt for generations to come in Northern Ireland, especially in relation to jobs and the peace process.

She called for the focus to be turned “where it should be” and called on Ireland and the EU “to stay strong on the backstop.”

“There is a need for cast iron guarantees. They need to be written down. Simon Coveney and the Irish Government should get a written guarantee that they can’t back out of.

“If the British people want to leave the EU, I wish them the best of luck, but I’m concerned about the island of Ireland.”

Ms O’Neill warned that Tánaiste and Minister for Foreign Affairs Simon Coveney needed to be wary of “the antics, the chaos” and the threatened leadership of Ms May.

Ms O’Neill rejected suggestions that if Sinn Féin MPs had taken their seats in Westminster there would have been a different result in the vote in the British parliament last night.

“That’s a wee bit of nonsense. The people of the North turned their back on Westminster. They voted for abstentionism. It’s not simply a mathematical game here.”

Brexit will not be sorted out in Westminster she said.

Government ‘should be getting worried’

Meanwhile, Fianna Fáil has said the Government “should be getting worried”about Brexit following Monday night’s vote.

Ms Chambers told RTÉ’s Morning Ireland that she is not sure “where we go from here.”

The most worrying amendment that was passed is the one that relates to the backstop, she said.

The British government has already proposed a temporary “backstop” arrangement to prevent a hard border on the island of Ireland until December 2021.

Ms Chambers said Monday’s vote has essentially made a backstop unlawful and therefore it is not possible to contain it in the withdrawal treaty.

“This is the very first time we’ve had something passed into law in the UK which does effectively preclude the backstop.

“Because they have said that Northern Ireland cannot form part of a separate customs territory to Great Britain, that’s the wording of the amendment.

Ms Chambers said she was not sure how Ms May could now enter into negotiations knowing that she cannot agree to a backstop.