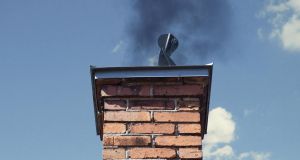 A ban on smoky coal was first introduced in Dublin in 1990, and has been adopted by many towns and cities across the country. Photograph: Getty Images

Irish citizens’ lives are being endangered by Government inaction on smoky coal and must be put ahead of “vested commercial interests”, a group of scientists, academics and environmentalists has said.

In a letter to Minister for the Environment Richard Bruton, members of the Clean Air Alliance said that four people die in Ireland every day from the effects of air pollution. The group says the nationwide ban on smoky coal, which has been delayed by legal threats from some coal companies, would reduce harmful particles in the air.

“We are writing to you to express our grievous concern at the lack of Government action on air pollution. We believe that, as a first step, you should implement the nationwide ban on burning of smoky coal, and put the health of our citizens ahead of the concerns of our commercial solid fuel industry.

“We urge you, and your colleagues in Government, to put the lives of Irish citizens ahead of the associated vested commercial interests.”

Members of the Clean Air Alliance who have signed the letter include scientists Prof John Wenger and Professor Emeritus of Chemistry John Sodeau from UCC; physicist Prof Pat Goodman, assistant head of environment and planning Dr David O’Connor and environmental chemist Dr Eoin McGillicuddy, all of the Technological University Dublin; Ian Lumley and John Gibbons of environment and heritage body An Taisce and environmentalist and architect Duncan Stewart.

The organisation was originally formed in 2013 to campaign on air quality issues. It had scaled down its activities, but has reformed due to the delay to the smoky coal ban.

“The facts show that air pollution is the single biggest external threat to public health in Ireland, and makes an important contribution to global warming from solid fuel emissions. We need to find alternatives,” the group’s letter to Mr Bruton reads.

“Detailed research has shown that air pollution levels can be significantly higher in towns, and villages, that are not protected under the current ban. The burning of solid fuel is the major contributor to air pollution over much of Ireland today (along with transport). The universal advice of the EPA has called for the nationwide extension of the current ban.”

A ban on smoky coal was first introduced in Dublin in 1990, and has been adopted by many towns and cities across the country. However, campaigners say that 20 per cent of the population is still not covered by the ban. The UN said last week that the failure of governments across the world to ensure their citizens breathe clean air is “a violation of the rights to life, health and wellbeing”.

The group is requesting that the Government introduce a ban immediately, so that it can be in place for the start of the home-heating season in September.