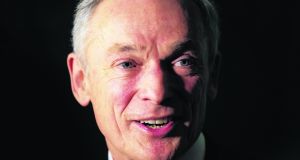 Minister for the Environment Richard Bruton announced a delay to the long-awaited ban on bituminous – or ‘smoky’ – coal. Photograph: Tom Honan

An internal report by the Environmental Protection Agency (EPA) reveals that people dwelling in rural towns face concentrations of harmful air pollutants which can be more than double those recorded in Dublin.

The report shows that in Enniscorthy, for example, particulate levels can be double those recorded in Bray and Dublin. Overall, towns and villages without a smoky coal ban have, on average, 20 per cent higher concentrations of microscopic particles than those with a ban.

Earlier this year, Minister for the Environment Richard Bruton announced a delay to the long-awaited ban on bituminous – or “smoky” – coal. The nationwide ban would have been a long time coming, even if it went ahead this year. Smoky coal was banned in Dublin in 1990, with larger towns and villages around the country following suit in the years that followed.

The total ban is a long-held goal for clean air campaigners. It was first announced by then-minister for the environment Alan Kelly in 2015. Prior to that, it had been signalled by his predecessor, Phil Hogan. When he held the office, Denis Naughten was on the verge of putting the ban in place before his ministerial career was derailed by the controversy surrounding the National Broadband Plan.

Coal companies had been given a year to run down their supplies, and many had invested heavily in smokeless fuel plants, anticipating that the ban would come into place, as planned, before this winter.

As previously reported by The Irish Times, the EPA delivered its report on the impact smoky coal was having on air quality in rural towns and villages on April 1st. However, just one day later, Richard Bruton announced the delay, with the department facing legal threats from coal merchants.

That report, which was released to The Irish Times following a request made under Access to Information on the Environment (AIE) legislation, reveals the widening gap between air quality in areas with and without a smoky coal ban. The results are stark.

Enniscorthy, which began monitoring the level of a particulate called PM2.5 only in 2018, has the highest concentrations of this matter in the State.

PM2.5 is a particle made of solids and liquids, and measures 2.5 microns in diameter (a micron is a unit of length equal to one millionth of a metre). According to the report, it is a better indicator of man-made particulate matter than the larger PM10, which is 10 microns in diameter.

Previous research shows that PM2.5 is predominantly produced in Irish towns and cities by the burning of solid fuel. At the time the report was written, the Co Wexford town had exceeded a daily limit on the concentration of air pollutant more than anywhere else in the country, a total of nine times. Enniscorthy has similar fuel use patterns to the rest of the country, but its topography means that polluted air can hang over the town.

The report shows that the level of PM2.5 in Enniscorthy was consistently above the air quality guidelines produced by the World Health Organisation (WHO) during the 2018-2019 winter heating season. In Enniscorthy and other areas without a ban, the particulate level “can be upwards of double the concentrations observed at the monitoring site in Finglas, Dublin and in Bray, Wicklow”, both of which have bans in place.

It is a similar story for PM10, the larger particulate. Enniscorthy has the highest average levels for this matter and, again, towns without smoky coal bans fare worse than the largest cities.

On average, concentrations of the matter are 6 per cent higher than towns with a ban, and 12 per cent higher than in Dublin and Cork. The large cities, counterintuitively, benefit from cleaner air because they have had the ban longer and have access to natural gas mains. Their large size also means people are unlikely to travel beyond their confines to purchase smoky coal, as can be the case in smaller towns and cities with a ban.

The report’s conclusion is unequivocal: “Continuing emissions from domestic solid fuel use are contributing to high levels of particulate matter in villages, towns and cities. We are above the WHO air quality guideline value for PM2.5 at many locations at which we monitor. The proposed extension of the ban on smoky coal will have a positive impact on levels of particulate matter particularly in rural towns and villages.”

However, the day after this report was given to the department, the ban was delayed. Critics say Government inaction will exacerbate this problem, and worsen health outcomes for those affected.