Minister says FAI is a ‘complete and utter basketcase; it’s in a very, very dark place’ 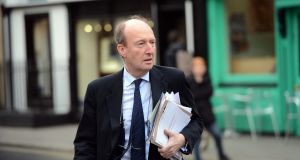 Minister for Sport Shane Ross says Ministers could not believe the association which runs Irish football has ‘sunk to such an awful low.’ Photograph: Eric Luke/The Irish Times

A plan to disperse State funding for grassroots football which bypasses the “utter basketcase” Football Association of Ireland should be ready by next week, according to Minister for Sport Shane Ross.

Mr Ross said a way needed to be found to get around €2.9 million in Government funding to the grassroots.

Accounts published by the association on Friday show the FAI which employs 200 staff, has liabilities of €55 million and its auditors, Deloitte, have declined to express the opinion that it is a going concern.

The accounts also show that the association’s former chief executive John Delaney, in addition to his annual salary of €360,000, Mr Delaney (52) would have been due pension contributions worth €285,714 a year and assorted other benefits, bringing the total value of the package over the period in question to €2.943 million.

Mr Ross said: “We are devising a mechanism - which I hope will be ready next week - whereby we can channel that money to grassroots football without any interruption: that’s absolutely imperative for us, because we’re interested in football. We’re not interested in the FAI.”

A suggestion that the FAI could split so Government funding could go directly to clubs at grassroots level, was “constructive,” Mr Ross said, adding he would look at any suggestions.

“If we’ve got people like Brian Kerr and Niall Quinn who are going to make suggestions, I would be very happy to talk to them about it.

Mr Ross described the FAI “as a complete and utter basketcase; it’s in a very, very dark place at the moment.”

He said Ministers could not believe that the association which runs Irish football has “sunk to such an awful low.”

“What we cannot believe - and I cannot understand, and I think is quite unforgivable - is that the independent directors who were promised to us for so long, have still not been appointed by the FAI.”

“We’ve got to see an organisation which is independent of what’s happened in the past - that’s terribly important.

“But I do want to see it patently clear to the public and to ourselves as Government that those who are taking over now are not affected by the sins of the past.”

The Minister said he had not been in talks with the FAI for months because it remained “full of the old guard”.

This showed the FAI was reluctant to change, he said. He would not enter talks with them until there was “a total clear out.”

The general secretary of the Professional Footballers Association of Ireland (PFAI), Stephen McGuinness, welcomed the suggestion, devised by FAI staff members, that the State fund a new body that would solely govern grassroots and community football.

Under this plan the FAI would continue to look after the international representative teams and elite football.

The plan suggests the Government would provide up to €10 million a year to fund development officers and coaches at youth level while the FAI would fund itself through commercial deals.

Mr McGuinness told RTÉ radio’s Today with Séan O’Rourke any ideas that allow the game to continue have “to be discussed and teased out.”

The PFAI represents 300 players for whom their sole occupation is professional football. “These are difficult times, it is a really tough industry. The FAI situation doesn’t help our industry.”