Face coverings should be compulsory on public transport, says union 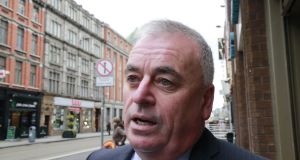 Dermot O’Leary, NBRU: ‘Unless the Government comes out with a clear policy underlined by legislation, you are not going to get people wearing those masks.’ Photograph: Nick Bradshaw

There is little evidence that commuters are wearing masks on public transport despite Government advice, the leader of the largest transport union has said.

National Bus and Rail Union (NBRU) general secretary Dermot O’Leary said the feedback from its members is that few people are heeding the advice and that there will inevitably be conflict on public transport.

He suggested that this vindicates his union’s stand that wearing face coverings such as a mask or a scarf on public transport should be mandatory not optional.

Under the current phase 2 of the lifting of restrictions, the public are advised to wear face coverings on public transport, but, unlike in Britain and other countries, they are not mandatory.

From June 15th it will be illegal in England not to wear face masks on public transport and in Belgium and France fines are already being issued to those who do not wear them.

“Unless the Government comes out with a clear policy underlined by legislation, you are not going to get people wearing those masks,” Mr O’Leary said.

“I would have thought that the scientific evidence is stacking up on a daily basis that wearing face coverings are a beneficial thing,” he added citing the evidence of some such as Prof Luke O’Neill of Trinity College Dublin (TCD) and the World Health Organisation’s (WHO) special envoy Dr David Nabarro who have come out in favour of wearing them.

“We would appeal to the Government to put forward the legislation and make it mandatory like it is in many countries throughout Europe, ” Mr O’Leary stated.

The NBRU has made a submission to the Dáil committee on Covid-19 asking for legislation to be brought forward in relation to the issue.

His observations were corroborated by the National Transport Authority (NTA) which stated there had been “no significant increase in demand on public transport services so far today with services running smoothly.”

“This is an important part of the effort to rebuild confidence in public transport as we move through the phases of the roadmap, and as restrictions are eased across the country.”