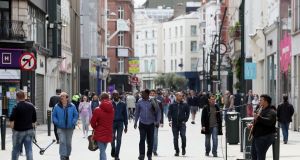 The figure represents an increase of over 20,000 on the number receiving this payment last week. A second factor that will accelerate the fall in the numbers receiving the pandemic payment is the impact of the Government decision that part-time workers who were earning € 200 per week or less before the Covid-19 outbreak will, from June 29th, no longer be entitled to receive the full €350 payment but will receive a payment of €205. At the Government press briefing on Monday, assistant general secretary at the Department of the Taoiseach Liz Canavan said “no person on the lower rate will receive less than they did (pre-Covid)”. The cumulative value of the employee subsidy scheme now stands a €1.42 billion with 59,000 employers now benefitting. The number is expected to increase sharply in the coming weeks before the scheme is closed in August.

Minister for Social Protection Regina Doherty has said that parents who cannot return to work because of childcare issues will be able to claim the pandemic payment. “We have to support people until they can return to work,” she told RTE radio’s Today with Sarah McInerney show. “I want to reassure people the department will be there to support them until they can go back to work.” She said the reopening of crèches and child care facilities on June 29th “will make a massive difference,” she added.

Meanwhile, Minister for Health Simon Harris has said regional responses to restrictions for Covid-19 could be considered but it would be difficult to implement in a small country like Ireland. A “more nuanced approach” was something that could be considered, especially when there were county figures like Sligo where there had not been a case of the virus in 23 days, he said. Mr Harris also appealed to the public to “cop on” and to keep a list of people they meet.

Speaking on Newstalk Breakfast said he said he was concerned about the increase in the number of contacts people were listing when diagnosed with the virus. “Now is not the time to meet your first cousin once removed,” he said, urging people to keep the number of close contact to small numbers. The Minister also said he would like to see more people wearing face coverings on public transport and when shopping. “It’s not a magic shield, but it is a help.”

The Department of Health reported on Sunday that one more person had died from Covid-19, bringing the death toll in the State to 1,679. There were a further 25 confirmed cases of the disease reported, bringing the total number of cases to 25,201. Later on RTÉ radio’s Morning Ireland, Mr Harris said progress against the virus was still fragile, but that “today is a great day for the country, a really good day. People brought us to this point,” he said as Ireland enters its second phase of lockdown easing. The Minister said he wanted to see the good day become a good week, a good month and a good year. He called on people to decide in advance who they were going to meet and to do so out of doors if possible. “If we get through this phase things are looking good.”

Pubs serving food and opening on June 29th will have to give customers limited time slots in their premises and provide a “substantial” meal, under new guidelines being considered by Government officials. Guidelines for reopening the hospitality industry following the Covid-19 lockdown are due to be published on Tuesday and sources involved in the drafting of the documents say pubs intending to open at the end of month may be asked to provide two courses and operate table service. Hotels will also be advised to place key cards onto guests’ phones, ban buffets and provide breakfast in the room. Sources have said there is concern in the hospitality industry at the impact this will have on five-star hotels in particular and that further advice may be needed in relation to spas. While the draft guidelines still contain references to the two-metre social distancing rule, there is significant pressure and lobbying from business groups to reduce this to one metre.

Meanwhile, Dublin buses, trains and trams will be closely monitored on Monday to ensure continued physical distancing as the second reopening phase from the Covid-19 lockdown kicks in. Government and transport sources said difficulties in maintaining the two-metre limit between passengers would increase pressure to introduce mandatory wearing of face coverings. Bus and train inspectors are due to monitor passenger numbers and distancing behaviour on Dublin Bus services and on Dart and commuter trains as capacity will be limited to 25 per cent or less of normal to protect against the spread of the virus.