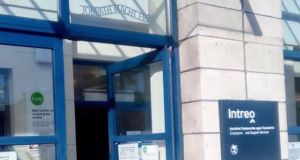 Gardaí have been asked to investigate the placing of a sign over a social welfare office in Cork mocking a slogan at the entrance to the Nazi concentration and extermination camp Auschwitz.

A picture of the slogan emblazoned above the entrance door to the Intreo office on the city’s Hanover Street has gone viral on social media, prompting the official Auschwitz memorial and museum in Poland to call for the “painful” sight to be removed.

The phrase Arbeit macht frei – German for “work sets you free” – was placed at the entrance of a number of concentration camps by the Nazis during the holocaust, including one of their most notorious, Auschwitz.

Jobpath is a social welfare scheme to help the long-term unemployed back to work.

Responding to pictures of the sign in Cork – which was styled similar to that over Nazi concentration camps – being posted on Twitter, Auschwitz Memorial and Museum described it as “painful” to see.

“Arbeit macht frei was a false, cynical illusion the SS gave to prisoners of the Auschwitz camp,” the official and verified account tweeted.

“Those words became one of the icons of human hatred hate.

In a statement on Thursday evening, the Department of Employment Affairs and Social Protection confirmed that “an extremely offensive sign had been placed on the outside of its office in Hanover Street, Cork by unknown persons yesterday afternoon and was removed immediately”.

“The Department very much regrets that this happened at one of its offices and it has reported the matter to the gardaí,” a spokeswoman added.

It is understood that there is CCTV footage captured at the city centre office and that it is being made available to gardaí.

The Garda Press Office was unable to immediately confirm whether or not it was investigating the incident.

However, a spokesman said section 7 of the Criminal Justice Public Order Act 1994 provides for an offence for displaying or distributing offensive material.

In 2015, property developer Johnny Ronan was forced to apologise after including a reference to the offensive phrase in his written statement to the Oireachtas Banking Inquiry.

In a statement at the time he said he was sorry “for any offence which has been caused by quoting the phrase ‘Arbeit Macht Frei’ (work will set you free) at the end of my submission to the Oireachtas Banking Inquiry. It was genuinely unintended.”