Explainer: Covid-19 restrictions may be working in Dublin 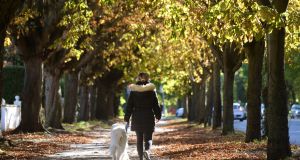 There are signs that the spread of coronavirus may have begun to slow in Dublin, as rates of the disease continue to increase sharply elsewhere in the country, in particular near the Border.

Dublin was moved to Level 3 of the Government’s phased Covid-19 plan three weeks ago, with those restrictions extended nationwide at the start of last week.

The measures included prohibiting indoor dining in pubs and restaurants, a ban on many sports fixtures, and restrictions on movement between other counties, unless for work, education or essential reasons.

Public health officials have previously stressed it generally takes a number of weeks before the impact of new restrictions can be seen on the growth of the disease, and in metrics like the daily number of new cases.

Government sources are hopeful that initial signs are showing the situation in Dublin has begun to stabilise following the third week of restrictions. The first indicators of whether the nationwide Level 3 measures have been effective or not may start to be seen towards the end of this week.

There were 1,826 additional cases reported between Saturday and Sunday, with 467 of those located in Dublin.

Speaking on Sunday, Minister for Health Stephen Donnelly said the R-number, which is the reproductive rate of the disease, was estimated to stand at 1 in Dublin. So for every person who contracts the virus it is estimated to pass on to one other individual, which would mean the path of the virus is stabilising and not rapidly spreading through the community at present.

Latest figures show the incidence rate in Dublin increased only marginally to 174.6, and is currently lower than seven other counties.

Donegal remains the worst affected county, with an incidence of 344.9 cases per 100,000 people over the past 14 days, according to figures from the Health Protection Surveillance Centre (HPSC) to midnight on Saturday.

Cavan is the centre of a large spike in the disease with an incidence of 338.7, following a 12 per cent increase in a day. On October 1st, the county had an incidence of 67. Monaghan, another border county, also currently has a high incidence with 319.3 cases per 100,000 people over the last 14 days.

At the start of this month the five hospitals with the highest numbers of Covid-19 patients were all located in Dublin.

St James’s Hospital had 16 Covid-19 positive patients, followed by the Mater (14), Beaumont (13), Connolly (10) and Tallaght Hospital (10). While the rest of the acute hospitals across the country were treating single digit numbers of patients with the disease.

On Sunday night, Cavan General Hospital had the most coronavirus patients (28), followed by Beaumont Hospital (22), and Tallaght Hospital (19). Cork University Hospital had 16 confirmed Covid-19 patients, and Letterkenny had 15.

Rather than the number of new cases on a given day, the hospitalisation rates are a key metric watched closely by the National Public Health Emergency Team (Nphet).

The steadily growing number of Covid-19 patients in acute hospitals – now at 216 nationwide – is one of the factors Nphet is most concerned about. Particularly given the well documented lack of capacity in the country’s intensive care system.

Looking at the rate of spread inside the capital, south Co Dublin continues to have a lower incidence of the disease, with higher rates in the city centre, south-west and northside.

Based on epidemiological data for each local electoral area, Blackrock, south Dublin, had an incidence rate of 77, the lowest in the county. Rathmines-Kimmage had the highest at 306. This data is for the previous 14 days up to 5th October, so comes with a health warning as it is a week old.