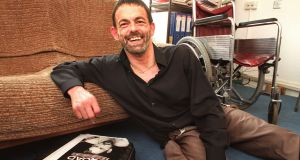 Paddy Doyle, the author of The God Squad and disability activist, has died at the age of 69.

He was born in Wexford Hospital in May 1951, and his early years were happy, but his life was blighted by the death of his parents when he was four.

His mother died from breast cancer at the age of 43 and his father took his own life five weeks later.

In August 1955 he was deemed by Wexford District Court as being without a “guardian to exercise proper guardianship”.

Mr Doyle was then sent to St Michael’s, an experience he wrote about in The God Squad which was published in 1988.

The book was an immediate bestseller, winning the Sunday Tribune Arts Award for literature and the Dublin Lord Mayor’s Award.

It preceded by more than a decade the States of Fear documentary, which was broadcast on RTÉ in 1999.

That documentary by Mary Raftery is widely credited with beginning the process of exposing the regime of abuse and cruelty in residential institutions in the State.

Mr Doyle said he endured a brutal and cruel regime and suffered frequent beatings in the school. “You were beaten with a bamboo cane until you screamed, and then they believed the devil was out of you.”

He told The Irish Times in 1988 that the Sister of Mercy nuns in St Michael’s tried to prevent him from finding out about his father’s death.

“I knew the horror of being beaten until it was no longer possible to stand up,” he said.

When he was nine, he was sent to hospital and diagnosed with “post-polio” and underwent leg and brain surgery. In his book Mr Doyle maintained that his condition was a psychosomatic one brought on my the trauma of his childhood.

He became a strong advocate for people with disabilities and survivors of abuse.

He is survived by his wife Eileen, his three sons, Niall, Ronan and Shane and his six grandchildren. The funeral arrangements have yet to be made.

His middle son, Niall, said The God Squad was “groundbreaking stuff” when it was first published and marked his father out as a fearless campaigner.

“He was not afraid to speak his mind on anything. He could be quite stubborn in his opinion. He was never afraid to have his voice heard or be the voice of something he believed in,” he said.

“One of his mantras in life is that we should all be equal. He didn’t believe that someone with disabilities should be ruled out of anything. That was a family mantra.”

He said his father, who settled in Saggart, Co Dublin has had difficulties breathing in his latter years and his situation had deteriorated in recent weeks. He died in Tallaght Hospital on Friday.

“For me as a his son, I fully appreciate all the work that he did around disabilities, but to me he was my dad,” he said.

“For me to sum him up in any way, it is very difficult. From the get-go, you could say that life was a struggle. From our perspective as a family, it was never something that was dwelled on.

“He was able to compartmentalise parts of his life. In the main, it was all very normal. We did not even think of him being disabled.”

Fellow author Dermot Bolger, who first published The God Squad, said: “Of all the books I published as editor of Raven Arts Press, Paddy Doyle’s The God Squad is the one that I’m most proud of because the book – and, more importantly, Paddy’s insistence of finally making his voice heard – played a part in transforming Ireland.

“His memoir broke so many taboos of silence that not only did bigger publishers refuse to touch it but I actually had problems finding a printer willing to print it for me. It is a book about injustice and ill treatment by powerful institutions within the state. Having just purchased a house with my late wife, I remember telling her that we would almost definitely lose it in legal costs if these institutions took an injunction against publication. Such was the affect that Paddy had on her (and on everyone he met) that she immediately said “publish and be damned”.

“Paddy was a courageous and undauntable spirit, combining great humanity and wicked humour with a fierce quest for justice not just for himself but for all victims of institutional abuse and anyone who faced daily discrimination because of disability. He could have been embittered by his past, but whenever I visited him to work on this book, in the bustling nest of love he shared with his wonderful wife and children, I left enriched by their company, by his humanity and his laughter. I was privileged to have known him.”

Rónán Hession, author of Leonard & Hungry Paul, said: “It’s fair to say that my reading of The God Squad while at secondary school was something of an awakening. It not only affected how I felt about the world, but changed the way I looked at it. It is an essential book, written with great humanity and honesty. Paddy Doyle made a major contribution to the opening of discourse within Ireland.”

Liz Nugent, the bestselling crime novelist, tweeted: “Very sad to hear this. Paddy and I attended the same clinic for many years. He never stopped fighting for what he shouldn’t have had to ask for. Such a brave soul, and a tortured one. Rest now, Paddy.”