Nphet contacts Government after figures for infections in Monaghan, Cavan and Donegal cause particular concern 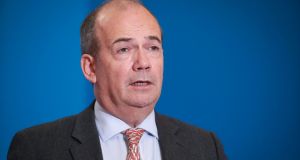 Border counties could be moved to Level 4 restrictions if the North goes ahead with introducing a lockdown as advocated by the chief medical officer there this morning, Dr Michael McBride.

Dr McBride is advocating a six-week lockdown to halt the sharply rising infection rate in Northern Ireland, according to reports this morning.

There is growing alarm in Government about the rise in cases in the North, where there were 1,066 new cases on Sunday and 902 on Saturday.

The Derry and Strabane region now has the highest rate of new infections in the UK, and public health experts here are concerned about importing new cases over the Border.

Sources said there have been discussions in Dublin about a rapid move to Level 4 for the Border counties in a bid to limit cross-border infections.

It is understood that the National Public Health Emergency Team (Nphet) has been in contact with Government regarding the possibility, and the three leaders of the coalition parties, Fianna Fáil, Fine Gael and the Greens, are likely to discuss the issue later today.

There is particular concern about the current figures for infections in Donegal, Cavan and Monaghan.

Donegal remains the worst affected county, with an incidence of 344.9 cases per 100,000 people over the past 14 days. However, Cavan, where the incidence increased by 12 per cent in a day, to 338.7, looks set to overtake Donegal in the coming days.

Monaghan has the next highest incidence, on 319.3. In Dublin, the incidence increased only slightly to 174.6, lower than in seven other counties.

Earlier, a senior DUP MP questioned the need for a region-wide lockdown in Northern Ireland.

Mr Donaldson said such a proposal was far more extensive than what was in place or being considered elsewhere in the UK or Ireland.

“A six-week full lockdown, back to where we were last March, would I think take us way, way ahead of anywhere else,” he told BBC Radio Ulster’s Nolan Show.

“I’d be wanting to know why we’re abandoning the policy of focusing in on the areas where the infection rates are highest.”

Mr Donaldson said Dr McBride needed to produce the data that justified the imposition of a six-week lockdown.

“What we’re asking the chief medical officer, why do we need a full lockdown in those areas where the infection rate is much lower so as to combat the spread of infection in places like Derry and Strabane?” he said.

“I think that’s a fair question.”

The DUP’s Westminster leader also challenged Health Minister Robin Swann on why Covid-19 contingency measures — such as the reopening of a Nightingale hospital at Belfast City Hospital — had not been rolled out, if the situation facing the local health service was so grave.

In the Republic, the number of patients with Covid-19 in intensive care has increased by half in the space of a week.

There were 30 virus patients in ICU this morning, according to the Government’s data hub, down one from yesterday but up 10 on a week ago.

Hospitalisations are up 80 per cent over the past week, to 221 this morning from 120 a week ago.

The Health Service Executive says it had 38 critical care, and 420 general, beds available on Sunday.

Covid-19 cases continue to rise in all but four counties in the Republic, according to the latest figures.

The incidence of the disease fell in Louth, Mayo, Roscommon and Tipperary on Sunday, compared to the previous day, according to an update from the Health Protection Surveillance Centre.

Carlow, with a 14-day incidence of 59.7, has the lowest figures in the Republic.

Overall, 7,548 people tested positive over the fortnight up to Sunday, giving a national incidence of 158.5.

There were 223 Covid-19 related hospitalisations, 14 admissions to ICU and nine deaths over the period.