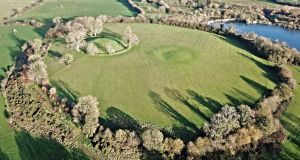 Archaeologists believe they have uncovered evidence of Iron Age temples and residences of early kings of Ulster at Navan Fort.

Archaeologists believe they have uncovered “significant” evidence of Iron Age temples and residences of early kings of Ulster at Navan Fort, close to Armagh City.

Academics from Northern Irish, Scottish and German institutes say they have found indications of “a vast temple complex and ceremonial centre of prehistoric Europe”, as well as the first evidence of continued medieval activity during the period when Navan Fort was associated with the kingship of Ulster.

The discovery was made adjacent to the Navan Fort visitor centre which is associated with Cúchulainn, the Red Branch Knights and the Ulster Cycle of tales. It is also associated with Conchobar Mac Nessa, King of Ulster, Deirdre of the Sorrows and her warrior lover Naoise.

The research was conducted using a non-invasive survey, led by Dr Patrick Gleeson, senior lecturer in archaeology at the School of Natural and Built Environment at Queen’s University Belfast and his team of colleagues from the University of Aberdeen and the German Archaeological Institute, Frankfurt.

The discovery was made using remote-sensing technology and a geophysical survey, rather than more time-consuming and destructive excavation, Dr Gleeson said. This allowed academics to map the below-ground archaeology by measuring the magnetic signatures and electrical resistance of the soil, he said. The method allowed them to detect the archeology below ground where there is no above-ground trace, he told RTÉ Radio. Actual excavation at the site would require significant funding, according to the academics.

Navan Fort, known in Irish as Emain Macha, is viewed as the ancient capital of Ulster and one of Ireland’s royal sites, a group of five ceremonial centres of prehistoric origin, documented in the medieval period as the capitals of the five fifths that divided Ireland.

Dr Gleeson said that “excavation in the 1960s uncovered one of the most spectacular series of buildings of any region of prehistoric Europe, including a series of figure-of-eight buildings of the Early Iron Age and a 40-metre timber-ringed structure constructed circa 95 BC”.

He said: “Our discoveries add significant additional data, hinting that the buildings uncovered in the 1960s were not domestic structures lived in by kings, but a series of massive temples, some of the largest and most complex ritual arena of any region of later prehistoric and pre-Roman northern Europe.”

Queen’s academics said the current work has shone new light on the monument, and for years to come will inform further research as they “explore what Navan Fort meant to our forebears and how they used the site”.

After the Covid-19 restrictions ease, the centre is to reopen on July 30th.