EuroMillions winner ‘may have to pay’ to deposit in wary banks

There is no chance of ‘living off the interest’ when rates are rock-bottom, says expert 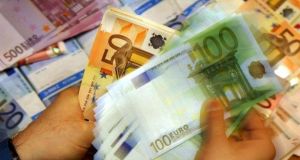 It may sound counter-intuitive, but banks probably would not want this money. File photograph: Toby Melville/PA

In the old days when somebody had a large financial windfall, it was often speculated that person could “live off the interest”.

An interest rate of just 1 per cent on the EuroMillions jackpot of €175 million would yield an annual income of €1.75 million, enough for any punter to live comfortably for the rest of their days without ever having to touch the principal

Unfortunately, no bank will give that rate of return. In fact, says Investec investment manager Dan Moroney, most banks will charge you for the pleasure of depositing €175 million with them.

“It may sound counter-intuitive, but banks probably would not want this money,” he said.

“There really is nowhere that is solid and short-term where you can park it and get a positive rate of return. That is just the nature of the interest rate environment we are living in.”

As a consequence of the financial crash, banks have been wary to lend like they did in the days of the Celtic Tiger so they have been rebuilding their balance sheets, said Mr Moroney.

“That being the case, if you gave them the money, they would probably just park it in their reserve account with the Central Bank in which case they are likely to pass the cost on to the saver.”

It is a policy that Central Banks around the world have adopted as a consequence of quantitative easing – the printing of money.

“Interest rates have been kept lower and it is a legacy of the amount of debt that is out there post the crash. One way to deal with that legacy of debt is to keep interest rates below the rate of inflation for a long period of time,” said Mr Moroney.

“That suits people who owe money. The victims of that are the lottery winners who don’t have a place to just park the money for the short term and give them a rate of return.”

Banks are depositing excess reserves with the Central Bank and being charged a negative interest rate of 0.4 per cent annually for the facility.

If a bank decided to pass on the full costs of the warehousing, it would cost the lottery winner €700,000 per year.

The €175 million lottery winnings could buy the following: