Ireland and the Euromillions: The biggest winners since 2005 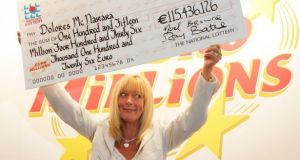 Somewhere in Ireland this morning, somebody woke up with the country’s biggest ever lottery win of €175 million.

February’s Euromillions windfall is the latest in a string of wins on this island - but can you remember them all?

July 2008: One lucky player from Co Tipperary won a €15million jackpot with a ticket bought in Carrick-on-Suir.

June 2009: A family syndicate took home over €29.4million with a ticket they purchased in Dublin.

June 2013: A winning ticket sold in Beaumont, Dublin, was worth over €187million.

September 2013: A young man from the southeast shared a jackpot of over €25million with a player in Spain.

April 2014: A jackpot prize worth €15million was claimed on a ticket sold in Castlebar, Co Mayo.

September 2014: An €86.7million jackpot was won by a syndicate from Ballybrack, Co Dublin.

January 2016: A syndicate of friends won over €66million. The ticket was sold in an Eason’s in Co Carlow.

January 2017: A Dublin work syndicate claimed €88.5million with a ticket that was sold in Lusk, Co Dublin.

July 2017: A syndicate from the west of Ireland won a €29million EuroMillions jackpot with a ticket sold in Castlebar, Co Mayo.

January 2019: Frances and Patrick Connolly, from the village of Moira in Co Down, won €130 million from a ticket they bought on New Year’s Day.

February 2019: Ireland’s biggest ever lottery win of €175 million was announced on Tuesday, with the lucky winner yet-unknown.