Beast from the East: Status Red snow alert in place until Friday

The National Emergency Co-Ordination Group for Severe Weather has asked the public in Leinster and Munster to stay indoors from 4pm on Thursday until noon on Friday and to monitor further updates from Met Éireann. Video: Merrion Street 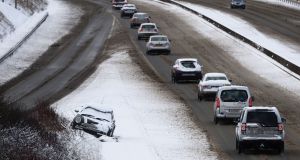 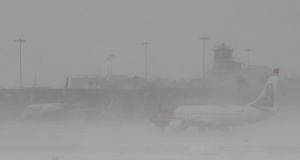 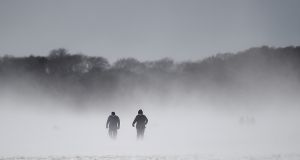 People walk through snow at the Phoenix Park in Dublin. Photograph: Clodagh Kilcoyne/Reuters

The public has been asked to stay indoors from Thursday afternoon as Storm Emma descends upon the east and south of the country causing further heavy snow.

The National Emergency Co-Ordination Group for Severe Weather has asked the public in Leinster and Munster to stay indoors from 4pm on Thursday until noon on Friday and to monitor further updates from Met Éireann.

The forecaster has issued red weather warning, its most severe alert, for these times in all of Munster and Leinster, having issued a red alert at 5am for Dublin and much of the east coast on Wednesday, as the “Beast from the East” hit these areas.

It has also issued an orange snow-ice warning for Connacht, Cavan, Monaghan and Donegal from 8pm on Thursday to noon on Friday.

There will be no Bus Éireann services on Thursday or Friday.

In a statement on Wednesday, the HSE said “only essential public services will operate on Thursday and Friday in the areas where a red warning exists.

“For our hospitals this will mean cancellation of non-urgent outpatients and most elective work.”

Portiuncula hospital has also cancelled all elective inpatient and day case procedures scheduled for Thursday and Friday, as well as outpatient clinics.

Taoiseach Leo Varadkar has moved to reassure the public that the full force of State resources has been applied in preparation for some of the worst weather conditions in decades.

At a briefing this evening, Mr Varadkar reiterated the appeal of authorities for people to get home and stay home by 4pm on Thursday.

Accumulating snow is expected to reach 25cm in Leinster and Munster and rise to 40cm by Friday afternoon.

“Tomorrow we are expecting exceptional blizzard-like conditions,” the Taoiseach said. “I want to reassure everyone at home and those still at work that I directed that the full resources of the State should make every effort to ensure the safety and welfare of our people.”

Storm Emma is due to move from the south to meet polar air from the east, the combined effect of which will bring heavy snowfall and winds of up to 100km/h.

“Having considered this serious warning, the National Emergency Co-ordination Group has advised that people should not venture out of doors while the red-level warning is in place,” Mr Varadkar said.

“Employers should assess whether it’s safe or even necessary for them to open and whether it is safe for their staff to travel to and from work.

“We have not experienced blizzard-like conditions like this since 1982. But the reports from that time remind us of the serious and lifethreatening conditions that can be posed by heavy snow and strong winds when they come together.”

Minister for Transport Shane Ross said services would only resume in the worst affected areas once it was safe for them to do so.

He said there would be serious but “controlled” disruption to public transports, including the cessation of Dublin Bus services from 10pm on Wednesday.

“The drama of the situation, the difficulties faced will be I suppose represented best by me saying that there are going to be 25cm of snow tomorrow, that’s anticipated, and 40 by Friday lunchtime. An almost unprecedented situation,” he said.

Seán Hogan, chair of the National Emergency Co-ordination Group for Severe Weather, also said employers need to consider whether it is possible or necessary for them to open on Thursday.

He said Government departments not providing public services would close on Thursday and Friday in Munster and Leinster. He said the emergency group was asking people to take “heed of the advice” being given.

Mr Hogan said it would be “suicidal” to go driving in the blizzard conditions forecast for tomorrow afternoon. He said “what we are telling people is do not be out there from 4pm tomorrow”.

Evelyn Cusack, deputy head of forecasting at Met Éireann, said there will be “zero visibility” during the snow storms that are forecast from Thursday afternoon.

There is currently a red snow-ice warning in place for Dublin, Kildare, Louth, Wexford, Wicklow, Meath, Cork and Waterford.

There is a status orange snow-ice warning in place for Carlow, Kilkenny, Laois, Longford, Offaly, Westmeath, Cavan and Galway.

Minister for Housing Eoghan Murphy said that “the severe weather event that had been predicted has begun”.

He said transport disruptions will continue this evening and local authorities are managing “as best they can”.

“It is a dynamic situation and it is continuing to evolve. We would ask people not to delay in making their way home when they finish work this evening.”

Mr Murphy said that “tomorrow we are facing a different situation in Leinster and Munster” with the arrival of Storm Emma.

“This is a significant escalation in the weather event. We will see blizzard-like conditions and zero visibility. This is not weather people should be out in.”

The Defence Forces have been called out on eight occasions over the last 24 hours.

A statement from the Department of Education said: “Given the disruption to transport and the safety risks arising, most particularly in relation to the ability to get home safely before blizzard-like conditions hit Munster and Leinster, all schools, third-level institutions, colleges and centres of further education in red areas will be closed tomorrow and Friday.

The Department of Culture, Heritage and the Gaeltacht has said that all national parks and nature reserves in Munster, Leinster and Connacht will be closed to the public on Thursday and Friday.

The snow has caused major travel disruption, with many roads treacherous.

All Ryanair flights to and from Dublin Airport have been cancelled for the rest of today.