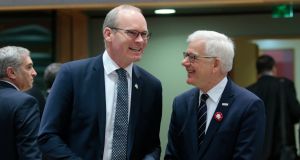 EU officials have cast serious doubt over Boris Johnson claims that Northern Ireland businesses will not face post-Brexit customs checks when exporting to the United Kingdom. The British prime minister, who on Thursday on a visit to Northern Ireland contradicted his own Brexit secretary on the issue, was purporting to describe the customs deal in the latest version of the Withdrawal Agreement.

Unwilling to be drawn into British election controversy, a European Commission spokeswoman would on Monday only refer inquirers to a written description of the deal by its services which said explicitly that the North “will continue to apply the Union’s Customs Code (UCC)”. The UCC requires exporters to provide mandatory pre-departure declarations on goods and sets out export formalities.

The Tánaiste and Minister for Foreign Affairs Simon Coveney, on a visit to Brussels, also said he was “not going to get into a debate with Prime Minister Johnson in the middle of an election campaign.” But, he insisted, “The deal is the deal, it’s there in black and white. People can read it for themselves and I think it’s self-explanatory.”

Mr Johnson appears to be alone in reading it as not requiring checks in both directions on the Irish Sea. Under the proposed agreement the North will effectively remain part of the EU customs union to prevent the necessity of a border on the island.

In a video shot in Northern Ireland on Thursday night, Johnson told exporters from the North that under the terms of the Northern Ireland protocol to the latest Withdrawal Agreement they would not need to fill in customs declarations when they sent goods across the Irish Sea to the rest of the UK.

He added that if firms were asked to, they should call him and “I will direct them to throw that form in the bin . . . There will be no forms, no checks, no barriers of any kind.”

Mr Johnson clearly contradicted Brexit secretary Steve Barclay who had last month said that “exit summary declarations will be required in terms of NI to GB”.

In a Q&A note on the latest version of the Withdrawal Agreement the Commission recently said that under the proposed customs regime “Northern Ireland will continue to apply the Union’s Customs Code (UCC) and will remain aligned to those rules of the single market in order to avoid a hard border on the island of Ireland.”

The Commission was yesterday unwilling to criticise or contradict the British prime minister publicly, but made clear that the UCC includes mandatory pre-departure declarations and export formalities.

A spokeswoman said that the entry procedures from Northern Ireland to Great Britain would be for the UK to determine, but in accordance with its international obligations, ie the World Trade Organisation rules, or those of free trade agreements to which it was party.

Checks on NI goods bound for the UK or on those from the Republic transiting through Northern Ireland are, it would appear, unavoidable.

Mr Coveney added that “the deal was signed from an Irish Government perspective. We can accept that deal. We think it works. We think it provides a special arrangement for Northern Ireland that in many ways gives Northern Ireland the best of both worlds from a trading perspective in terms of trading into the rest of the UK and of course trading into the EU single market.”