Eric Trump visits Doonbeg for a series of business meetings 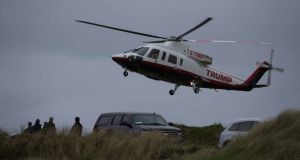 Security was tight around Trump International Golf Links and Hotel in Co Clare on Tuesday for the arrival of Eric Trump, son of US president Donald Trump.

Gardaí ­ and officials from the US embassy in Dublin were at the hotel from early yesterday ahead of the arrival of the 33-year-old executive vice-president of the Trump Organisation.

Mr Trump arrived at the property by helicopter and is due to hold a number of business meetings over the next two days.

The Greg Norman designed golf course, the hotel and a number of adjoining tourist cottages, were purchased by Donald Trump in 2014 for €8.7million.

A spokesman for the Doonbeg property confirmed Eric Trump was in Clare “on business”.

The community in Doonbeg is divided on plans by the Trump Organisation to construct flood defences to protect the golf course from sea erosion.

A revised planning application is awaiting a decision from Clare County Council. More than 30 objections were lodged to the plan ahead of a deadline earlier this year.

On Monday night, a public meeting was held in Doonbeg to discuss flood defences to protect the golf course and local farm land. The Doughmore Coastal Protection Group has expressed disappointment that a plan to erect a flood defence has not yet received planning permission.

“I hope he’s [Mr Trump] going to lay it on the line for the council and those who are against the project,” one local man said.

“If something isn’t done about the erosion, the golf course will just continue to be washed away and the place will close and local farms will be flooded again.”