Another election? Why, how will it affect Assembly talks, who is likely to win, and . . . why 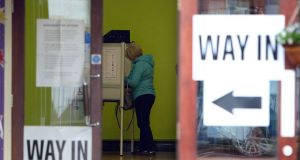 A voter stands at a booth inside a polling station as she prepares to cast her vote in Belfast during the last UK general election – on May 7th, 2015. Photograph: Paul Faith/AFP/Getty Images

They must love elections in Northern Ireland? Hardly, but the Northern politicians have this snap Westminster poll – the fourth in two years – thrust upon them by a British prime minister who couldn’t resist an opportunity to stick it to Jeremy Corbyn, and they just have to get on with it.

The timing of the election would indicate Northern Ireland isn’t high on prime minister Theresa May’s agenda? That seems a reasonable charge. The Northern parties and the two governments are engaged in talks at Stormont to try to restore the Northern Executive and Assembly. Calling an election in the middle of crisis negotiations isn’t conducive to persuading politicians to make the necessary compromises to conclude a deal. However, perhaps Ms May reckons that with Northern Ireland it is a case of perpetual crisis.

The greatest opportunities lie with Sinn Féin. . . It has realistic chances of making gains in five constituencies.

What will happen these talks? According to the northern secretary James Brokenshire, they will continue with early May set as the deadline for a deal. Minister for Foreign Affairs Charlie Flanagan also wants the parties to just reach agreement, but, more realistically, he is conscious that politicians’ “mind-sets will inevitably shift to campaign mode”. Certainly, all parties seem to think that little progress can happen in the face of an election campaign.

What will Brokenshire do if there is no deal by the early May deadline? He could bring back direct rule from Westminster. He also could call Assembly elections to coincide with the June 8th British general election. Or, citing the Westminster election as an excuse, he could extend the time for talks. The latter option, possibly the most likely, would require Westminster legislation on rates and budgets and other matters to let Northern Ireland civil servants effectively run Northern Ireland. That could bring the talks into the late summer or even into the autumn.

How do the parties stand at the moment in Westminster? The DUP holds eight of the North’s 18 single-seat constituencies. It lost South Antrim to the Ulster Unionist Party’s Danny Kinahan in the 2015 Westminster poll. Sinn Féin has four seats. It lost Fermanagh-South Tyrone to the UUP’s Tom Elliott in 2015. The SDLP has three seats, the UUP two, and Lady (Sylvia) Hermon is the longstanding independent unionist MP for North Down.

What party will benefit most by this election? The greatest opportunities lie with Sinn Féin. In the March Assembly elections it capitalised on the turmoil within the DUP over matters such as the Renewable Heat Incentive (RHI) scheme and the Irish language to come within one seat of Arlene Foster’s party. It has realistic chances of making gains in five constituencies – one from the UUP in Fermanagh South Tyrone; one from the DUP in North Belfast; and three from the SDLP in South Belfast, South Down and Foyle.

Those would be significant gains. Yes, but while possible they are far from guaranteed. Certainly the UUP’s Tom Elliott is very vulnerable in Fermanagh-South Tyrone, while the DUP’s Nigel Dodds is in a stronger position to resist the Sinn Féin challenge in North Belfast.

In the March Assembly election, Sinn Féin gained more votes than the SDLP in Foyle and South Down, so therefore the respective SDLP MPs in these constituencies, Mark Durkan and Margaret Ritchie, also would be under threat.

How do the DUP and the UUP meet the Sinn Féin challenge? For unionists the answer is obvious: pacts. The UUP could stand aside in North Belfast if the DUP did the same in Fermanagh-South Tyrone. If that happens, there also would be calls for pacts in constituencies such as South Belfast, possibly Upper Bann, and in East Belfast where Alliance leader Naomi Long is expected to try to win back her seat from the DUP’s Gavin Robinson.

Could the SDLP actually lose all its three seats? It would have to be very bad day for that to happen, but it is vulnerable. In Foyle in March, Sinn Féin was more than 2,000 votes ahead of the SDLP, but then again Mark Durkan is a “big political beast” with a pedigree all the way back to John Hume, so he will be hard to unseat. In South Down, Sinn Fein was 6,650 votes ahead of the SDLP in March which gives the party a strong chance against the outgoing MP Margaret Ritchie. But, again, Westminster polls are different than Assembly elections and Ritchie, who is well anchored in South Down, with the assistance of unionists voting tactically, could still hold on. The SDLP also will major on the fact that it argues its case in the chamber of the House of Commons, while Sinn Féin refuses to take its Westminster seats.

And in South Belfast? This is one of the most interesting of the political battles. The SDLP’s Dr Alasdair McDonnell held his seat in 2015 with just 24.5 per cent of the vote. In March, the DUP, the SDLP, Alliance and Sinn Féin in that order were quite close with the DUP taking almost 9,000 votes to the SDLP’s 8,353. Alliance and Sinn Féin – both on about 7,600 votes – weren’t far behind, so anything could happen here.

There also will be calls for Sinn Féin and the SDLP to enter a pact over Fermanagh-South Tyrone and South Belfast. While Margaret Ritchie said that the SDLP “don’t do electoral pacts” the pressure will remain on the party to enter an arrangement with Sinn Féin.

Brexit surely will be a big issue? Pro-Remain parties such as Sinn Féin, the SDLP, Alliance and the Greens may pitch the election partly as an effective rerun of the EU referendum but the sectarian headcount issues of the union and a united Ireland will dominate as usual. In 2015, the result was 11 seats for unionists, seven for nationalists. This time the focus will be on whether nationalists, and in particular Sinn Fein, will narrow or close that gap, and whether the result will bring a Border poll closer.

And after all the votes are counted? It’s back to jaw-jaw and trying to get Stormont back up and running again.

1 Ireland among countries urged to consider reinstating restrictions
2 Sinn Féin apologises as member resigns over social media abuse
3 ‘We feel we are in limbo’: Wedding plans in chaos due to Covid-19
4 Trump evacuated from briefing after shooting near White House
5 Global Covid-19 cases pass 20m as WHO points to ‘green shoots of hope’
Real news has value SUBSCRIBE